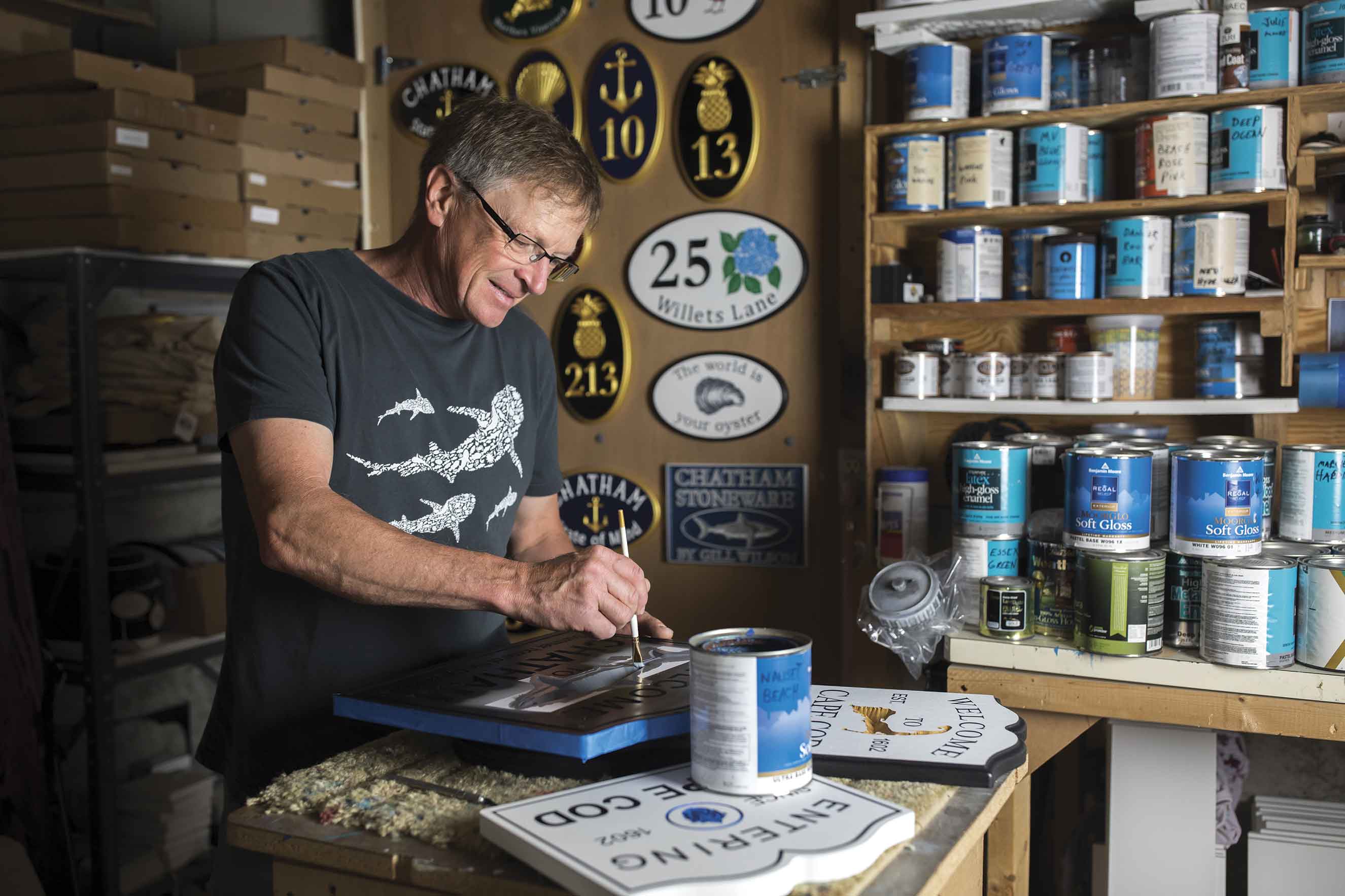 For Jerry Evans, Taylor Brown, Barb Knowlton and Steve Wardle, Chatham provides both seaside inspiration and sustainable livelihoods. Inside their cottage studios, they create fine clothing, unique jewelry and home designs that illustrate the charm of Cape Cod. These artisans all share a fascination with the magnificence and mysteries of our coastal community—and their creations reflect their interpretation of the natural world that surrounds us.

From Earth to Elegance

For married couple Steve Wardle and Barb Knowlton, owners of Forest Beach Designer-Goldsmiths, inspiration can be found just down the street—from ocean waves and lighthouses to sea creatures and seashells.

Knowlton describes her one-of-a-kind creations as vision pieces. For her argentium silver cuff, for instance, Knowlton envisioned an underwater sea adventure and selected opals to represent the ocean’s diverse life forms: jellyfish, a fish and a scallop—nestled in gold seaweed.

Wardle says his designs are often based on ancient Etruscan styles, giving jewelry settings an antique look. One of his recent rings showcases tanzanite set between diamonds in 14k gold.

Together, they share a passion for creating exquisite jewelry that captures the brilliance of Cape Cod summer days.

Their daughter, Whitney, is talented, too. A recent visual arts degree graduate of SUNY New Paltz, she makes whale tail and shark fin rings, feather rings and earrings, and many other original designs.

Wardle began his goldsmith apprenticeship working side by side with his father, a metalwork professor. He received his Bachelor of Fine Arts degree from the Rochester Institute of Technology School of Fine and Applied Art. Knowlton received a Bachelor of Fine Arts and a Master of Science degrees from Syracuse University’s School of Visual and Performing Arts.

Now in their 25th year, they craft lavish rings and earrings; classic pearl necklaces; and modern pendants, such as a sparkling green dioptase oval set in gold with a diamond drop.

With the help of two additional goldsmiths, they make a line of 600 playful charms and 80 charm beads and ship them by the thousands all over the world.

Wardle said they source recycled gold and silver from refineries in New York and gems from small boutique cutters and miners in New England. They recycle the gold shavings from their work and send them to a refinery where the impurities are removed. Then they receive fresh balls of gold—seeds to sow again, in a sense.

Wardle likes the symmetry of running their business from an actual cottage that dates back to 1758. “It’s a cottage industry, not manufacturing,” he says. “We’re like the farm stand. We’re the neighborhood jeweler for people here in town, and across the country, too. Some customers we’ve had since we’ve been open.” 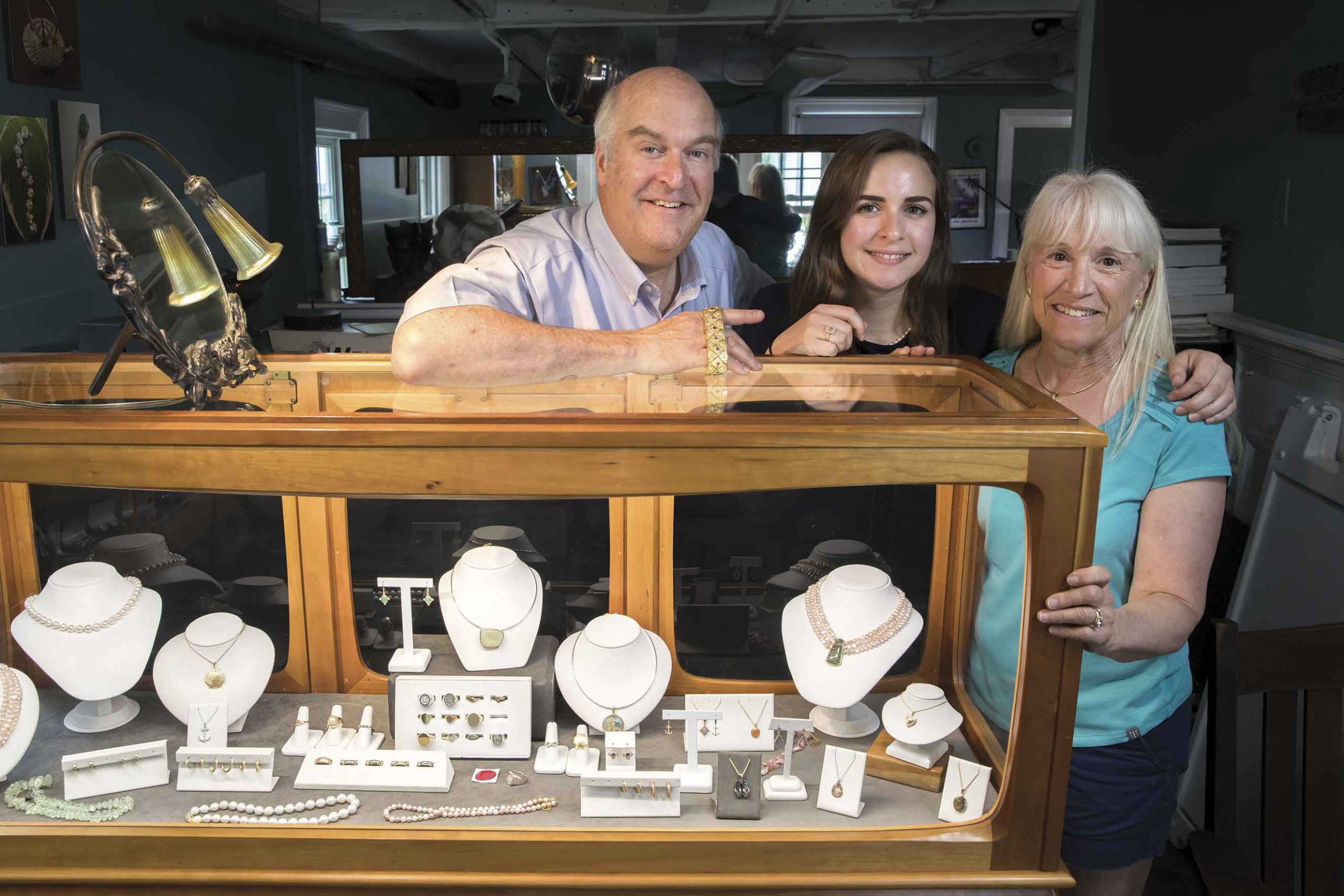 Steve Wardle and Barb Knowlton, along with their daughter, Whitney, create exquisite jewelry at their shop, Forest Beach Designer-Goldsmiths. 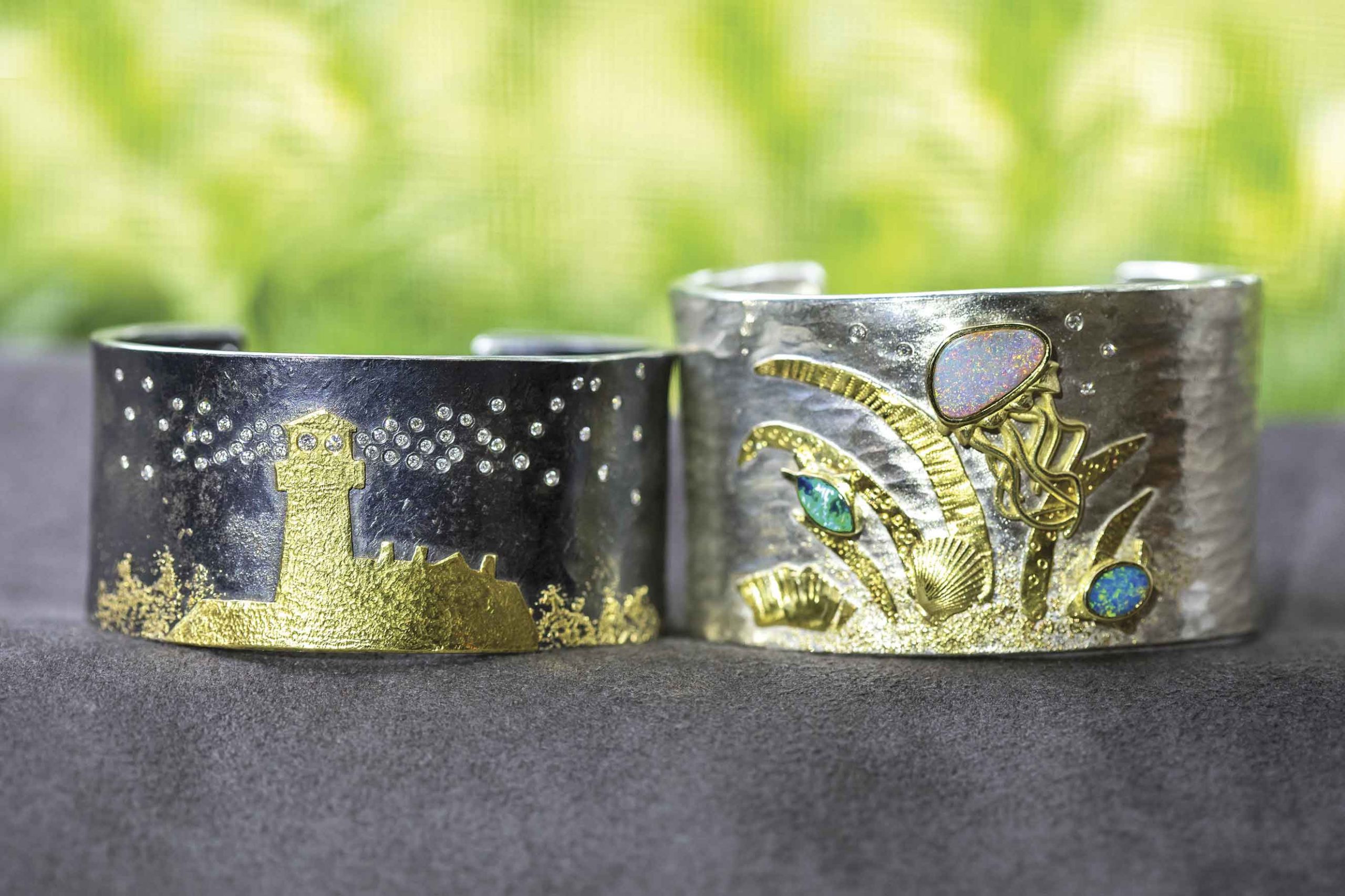 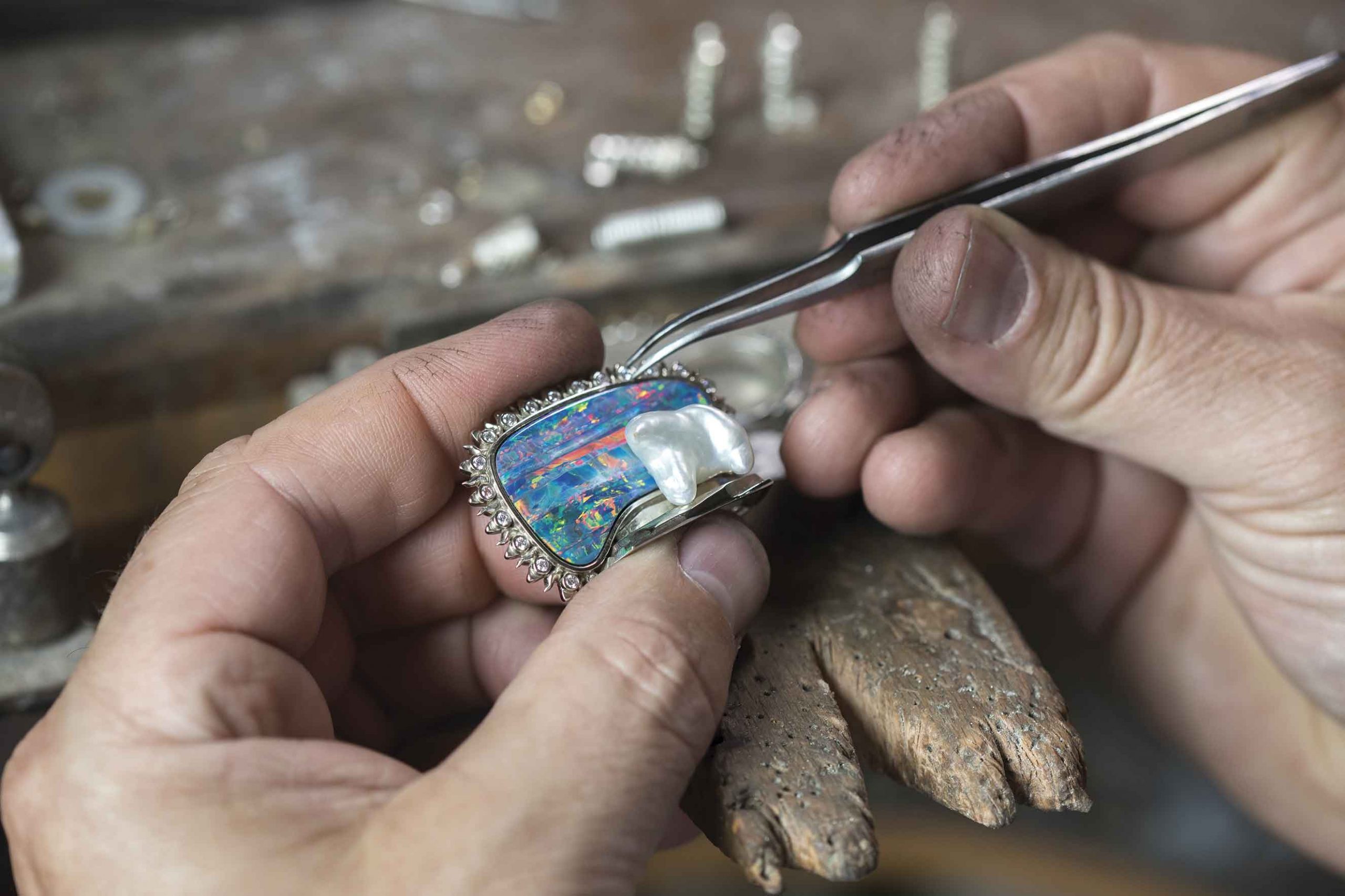 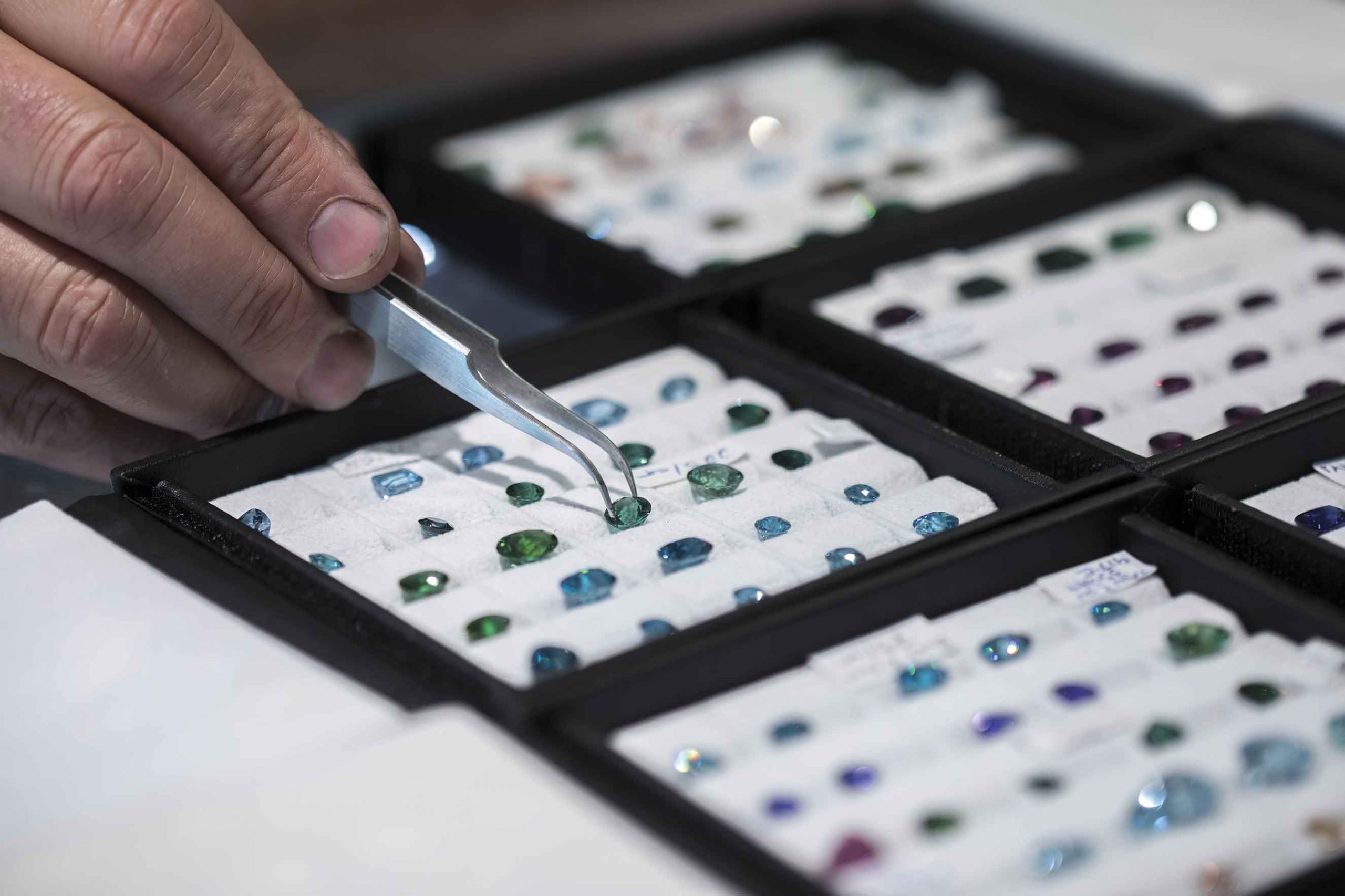 From Sea to Shop

Taylor Brown, owner of Fisherman’s Daughter, an eclectic boutique on Main Street, creates clothing and home décor designs that echo her childhood. “I grew up on a fishing pier,” says Brown, “watching my dad bait his gear and unload his daily catch.” When her mother spread out the fishing nets to dry, Brown was fascinated by the sea urchins and other creatures that fell out of the nets. “There were lots of quirky and different things to be inspired by,” she remembers.

Her lineage also includes a grandmother who was a seamstress and one who ran a flower stand. Brown spent a lot of time hand-stitching embroidery and arranging bouquets when she was younger.

She began designing headbands and children’s clothing after high school. At Cape Cod Community College, she took hand-dyeing and screen-printing classes. In 1999, she opened her retail store featuring an ever-changing selection of ocean-conscious apparel and swimwear, as well as accents for the home.

“I classify my look as a twist on the classic beach resort vibe,” says Brown, who designs women’s clothing, kids’ fashions and some fishermen wear. “It’s versatile, comfortable and elegant.

“I’m inspired by everything, so I try to do all of it. I used to do all [the] cutting and sewing, I hand printed everything,” says Brown.

But as her business has grown, that’s become a challenge. Now she sketches a pattern and works with factories to produce clothing. Often, she’ll make a silkscreen design from a drawing or sew on the final touches and accessories herself.

Her T-shirt designs favor undulating waves, octopus, squid, and, of course, her logo of a fisherman’s daughter mermaid looking out to sea.

“I sought out factories and made sure they weren’t sweatshops,” she says of her suppliers in Southeast Asia, Miami and Los Angeles.

“And all of my fabrics are fair trade. Since fabric production is tied to water—water that makes its way to the ocean—I want to make sure my fabrics are eco-friendly.”

In her cottage shop, Brown sells her own designs as well as clothing and jewelry from 50 other artists and producers. Air plants—also known as Tillandsia—resting in sea urchins are popular accent items.

“My favorite moments are when kids, or even adults, come in and have never seen a starfish or a natural shell,” she says. Those moments reaffirm her love for the ocean world and encourage her artistic endeavors. 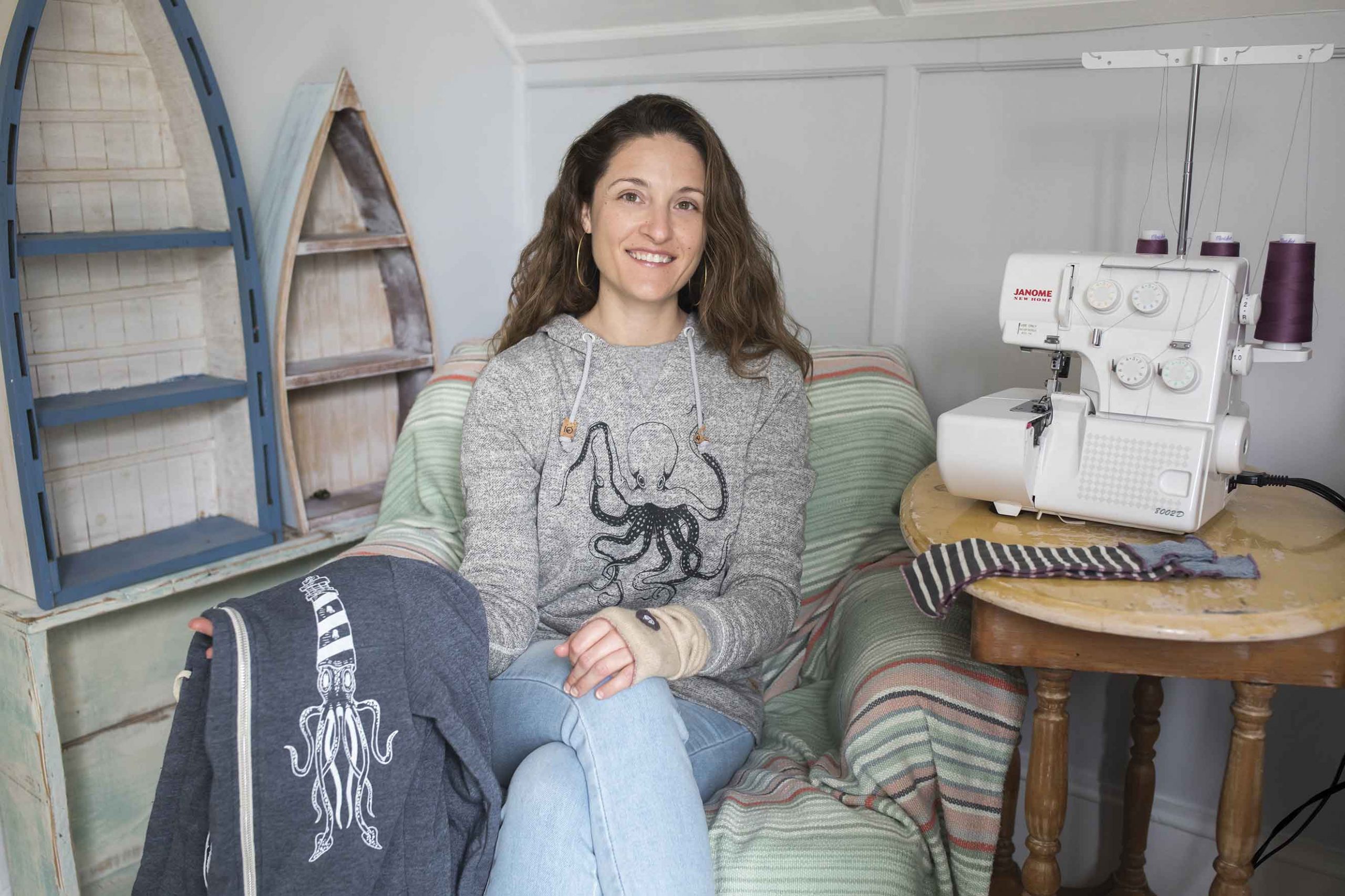 At Fisherman’s Daughter, owner Taylor Brown sells her own designs as well as clothing and jewelry from 50 other artisans and producers. 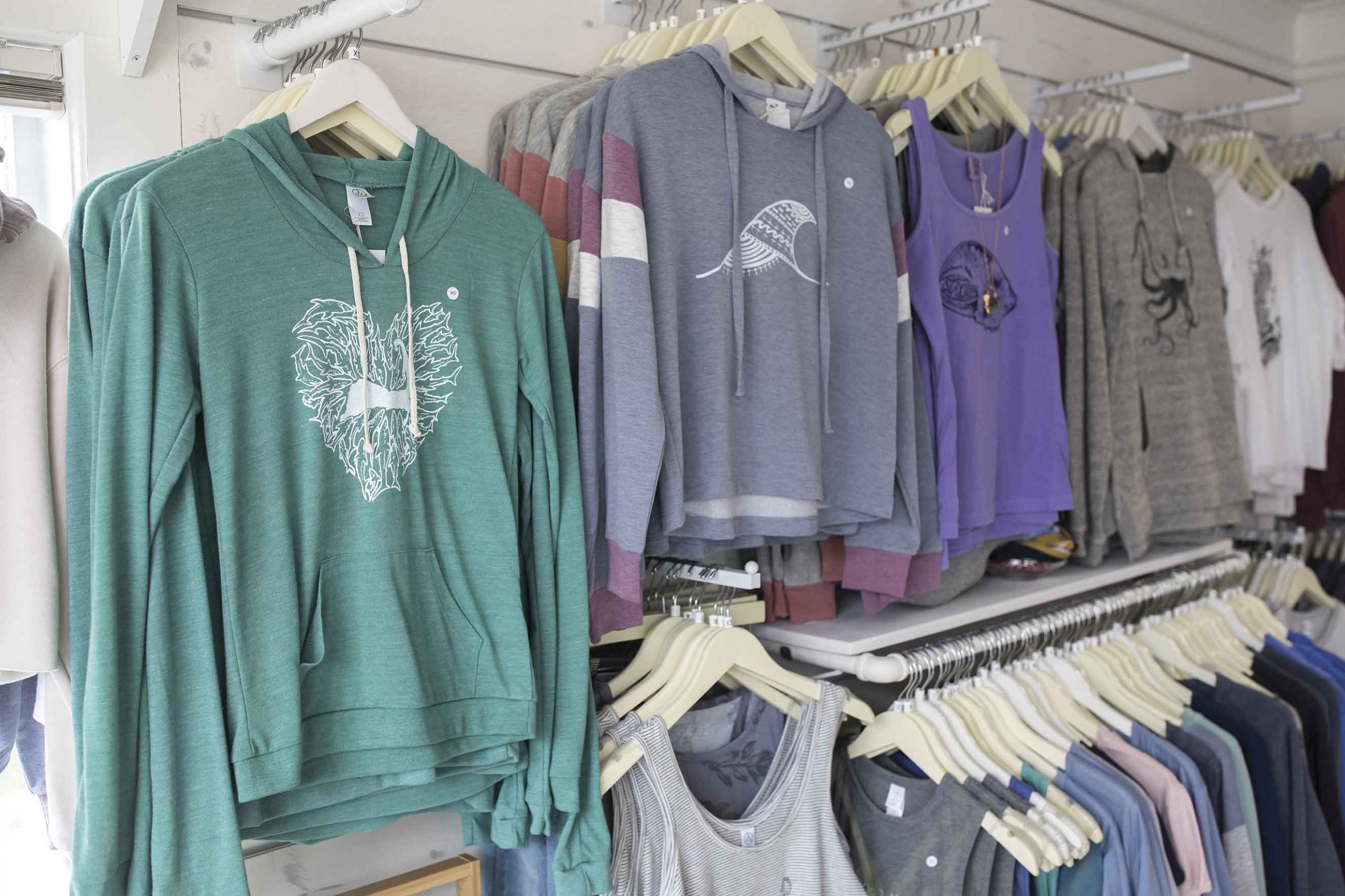 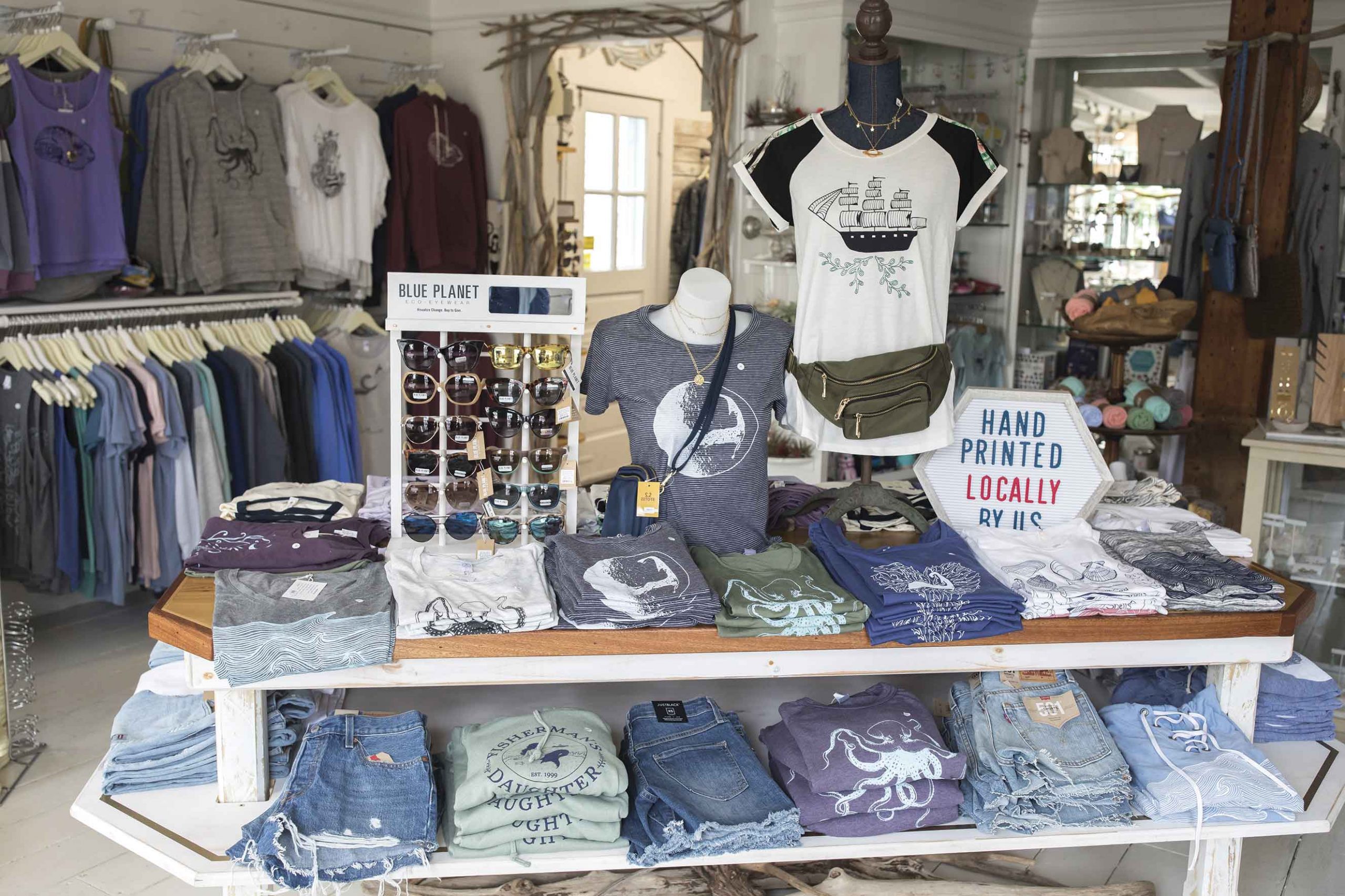 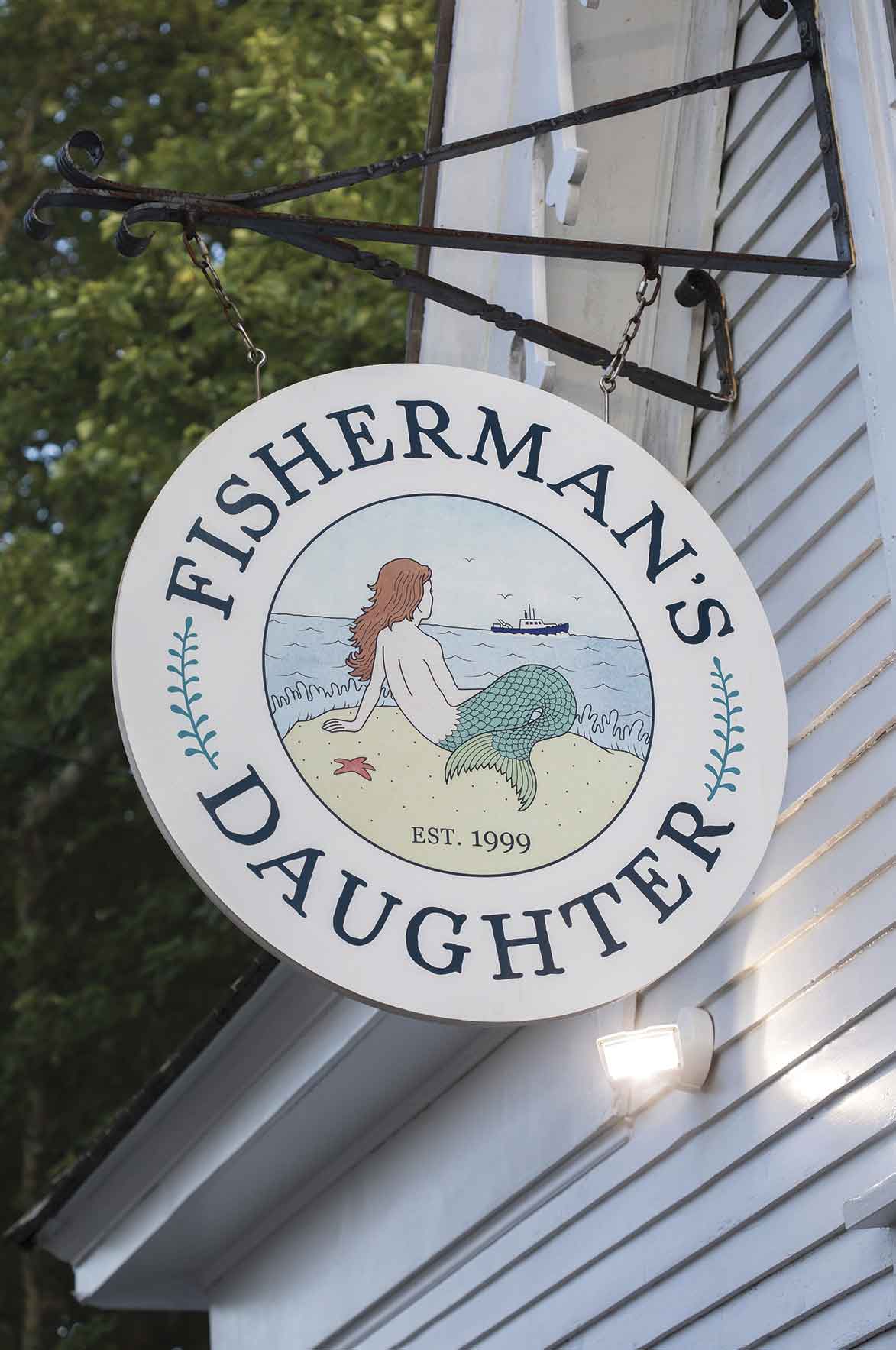 From Tide to Towns

For Jerry Evans, owner of Chatham Wind and Time, the idea to make time and tide clocks originally came from his passion for windsurfing. “You have to be an amateur meteorologist,” says Evans, if you want to catch the wind.

Evans grew up in the Lake Sunapee area of New Hampshire and earned a degree in machine tool technology. After working for a company in Nashua, he moved to Cape Cod in 1995.

“It was all about a lifestyle change and windsurfing,” says Evans. He chose Chatham as his home because he loves its extensive coastline and inner waterways.

To earn a living, he worked at Chatham Pottery for a few years making Ram press dyes and managing production in the studio. Some of his designs today reflect the pottery he made. He also helped a local sign maker, working with a CNC router. Eventually, Evans invested his passion for ocean-inspired designs and his machine tool experience into building a business of his own.

He started making clocks, but “with the advent of the iPhone,” admits Evans, “people don’t look at clocks much anymore.” He still assembles and installs weather instruments displaying wind speed and direction, and makes thermometers on backgrounds painted with hydrangeas, “entering town” signs, or the Chatham lighthouse.

Using a CNC router and CAD/CAM computer system, Evans also designs and carves custom signs celebrating the Cape’s towns and beaches. He cuts and sands each sign in his workshop, using a dust vacuum he designed to capture the shavings.

Many of his customers are second homeowners who like to hang his custom carved signs on their beach houses. If you drive around Cape Cod, you’re sure to see one of Evans’ “Entering Chatham” (or Brewster or Harwich Port, etc.) signs.

A true waterman, Evans draws ideas from things he sees when he’s walking the beach or engaging in one of his sports: windsurfing, kiting, surfing and stand-up paddle surfing.

Evans is also a self-professed shark enthusiast and his favorite designs favor sharks.  His “Welcome to Chatham, Summer Home of the Great White” sign was born of this interest. The shark drawing is his own design that came from a photo he converted to vector format and then added shark ‘bites’ for effect.

He built a shark weathervane for one customer, and the Atlantic White Shark Conservancy sells his Christmas ornaments—smaller versions of his sign—in the Shark Center’s gift shop in North Chatham.

“Seals and sharks are both an environmental success story—both came back to the Cape,” says Evans. He embraces all the wonders of the Cape environment and happily shares his enthusiasm with customers and friends alike. 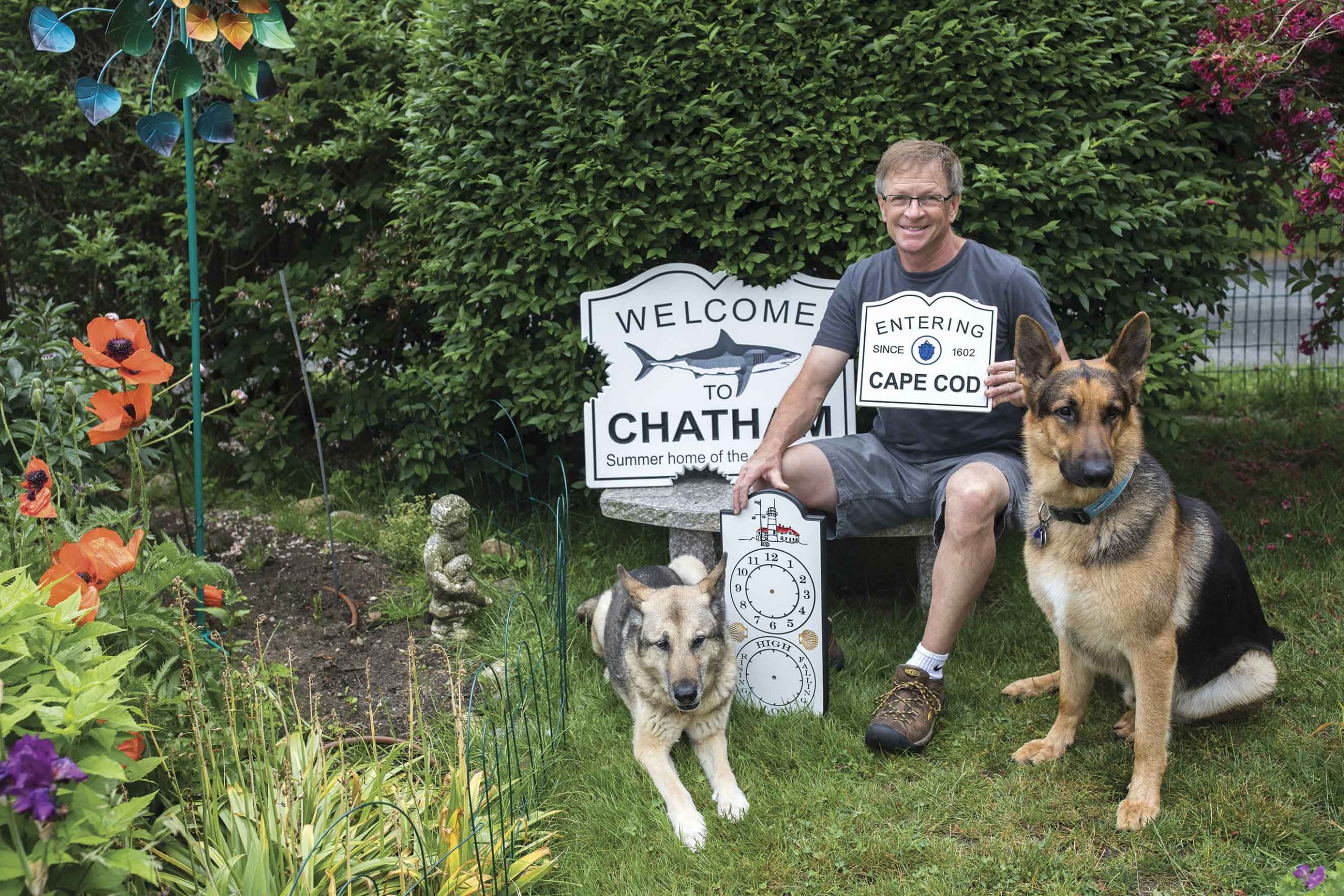 Jerry Evans, with his dogs Amy Marie and Rainier, built his business Chatham Wind and Time into a success story with his custom “entering town” signs and tide clocks. 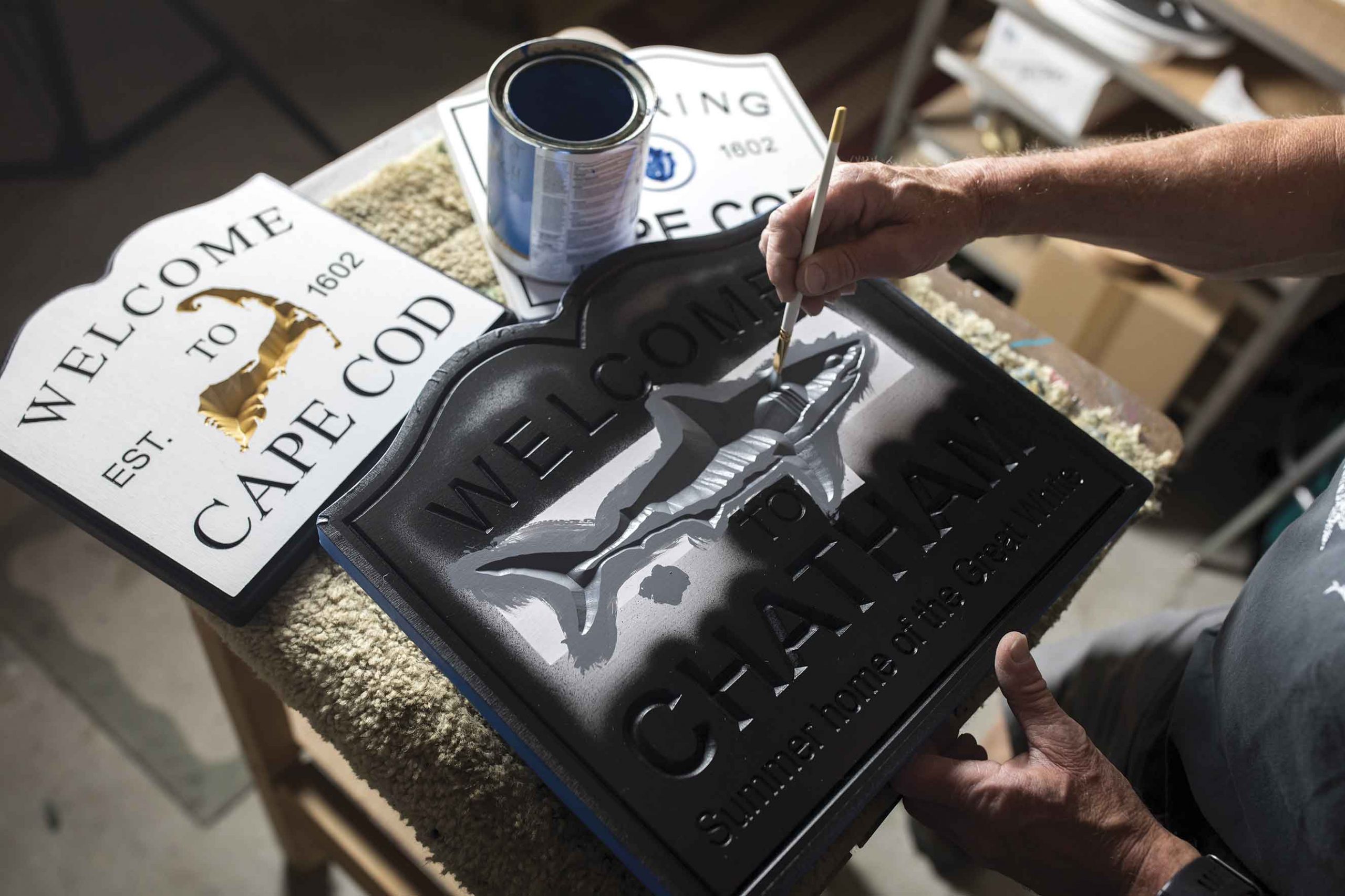 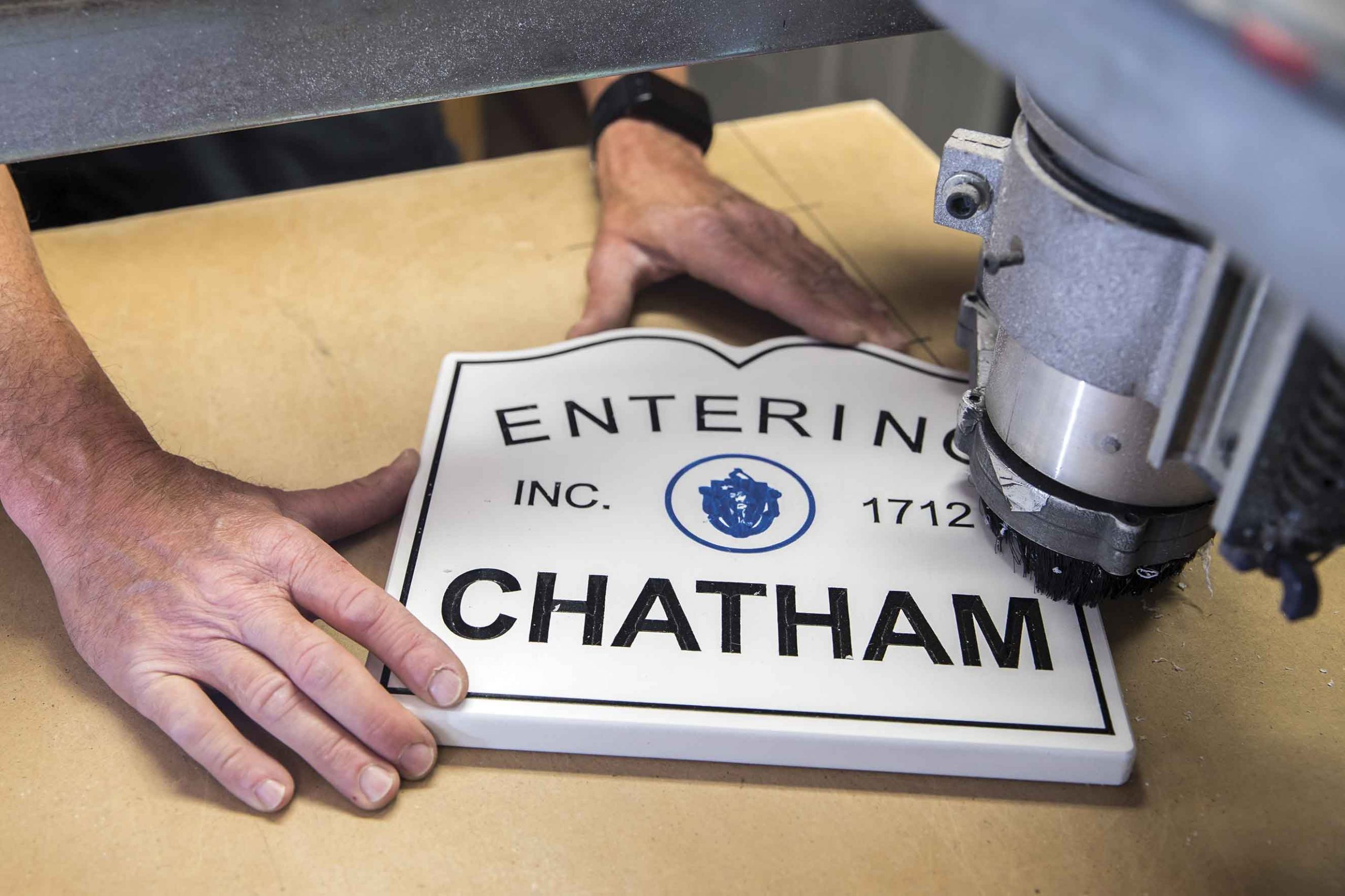 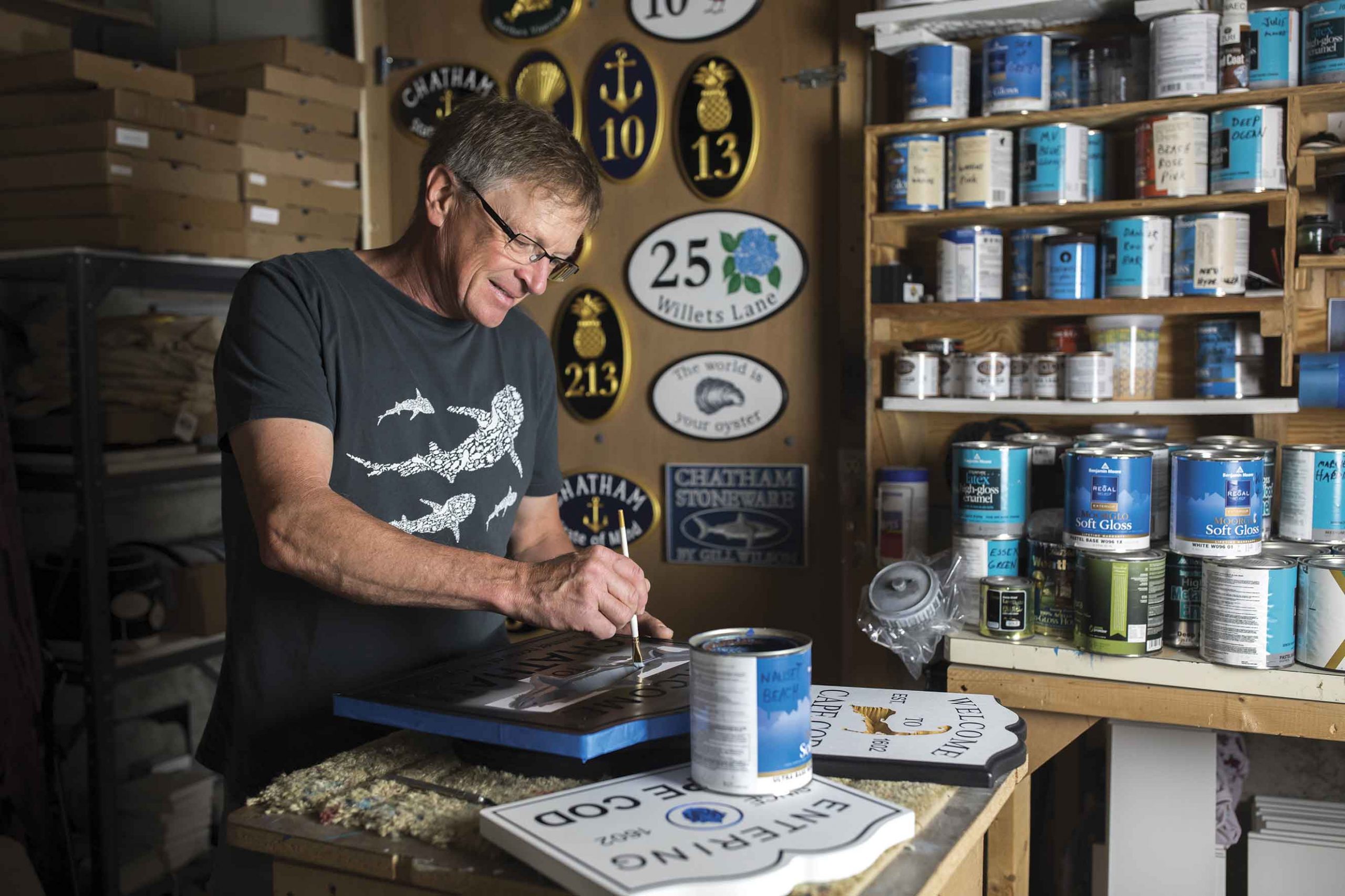