BY: BILL HIGGINS
PHOTOGRAPHY BY: MICHAEL AND SUZ KARCHMER

From sunup to sundown, Veterans Field is alive with baseball clinics, field prep, early workouts, concessions, merchandise sales and the game itself. We spent time at Veterans Field to watch the rhythms of days (and nights) unfold. Another Anglers’ season is at hand and it’s time again to “Play Ball.” 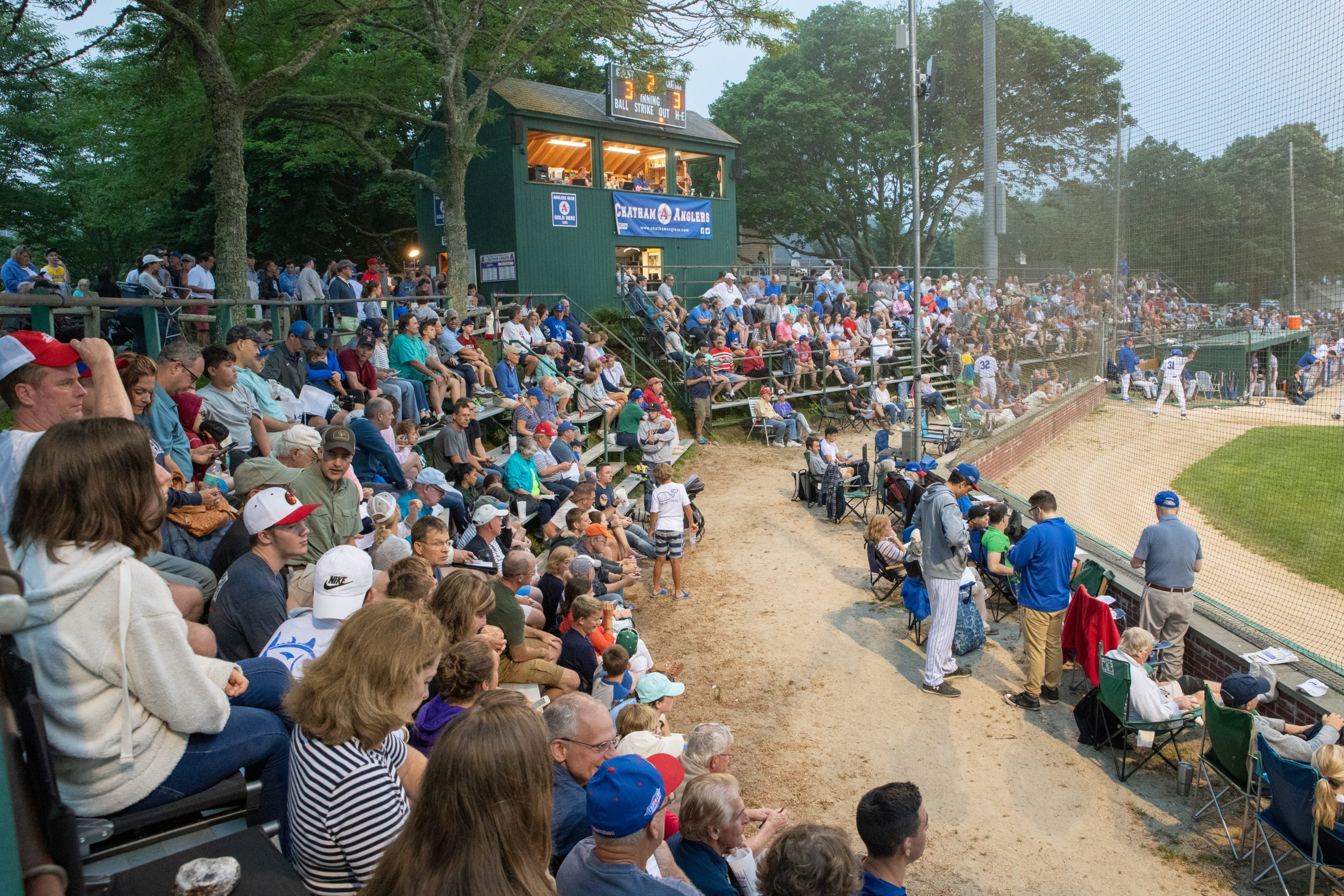 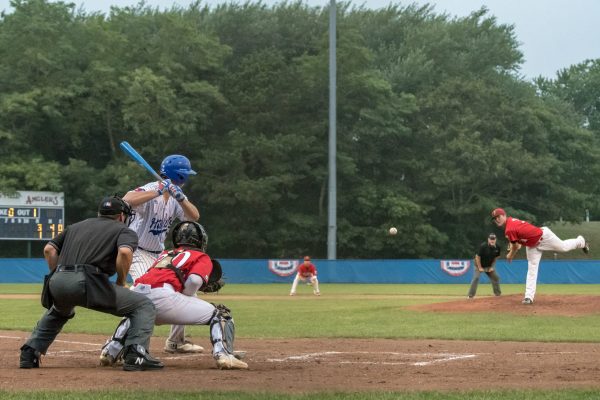 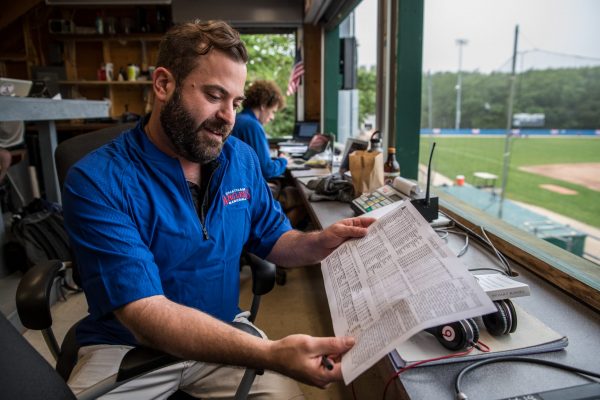 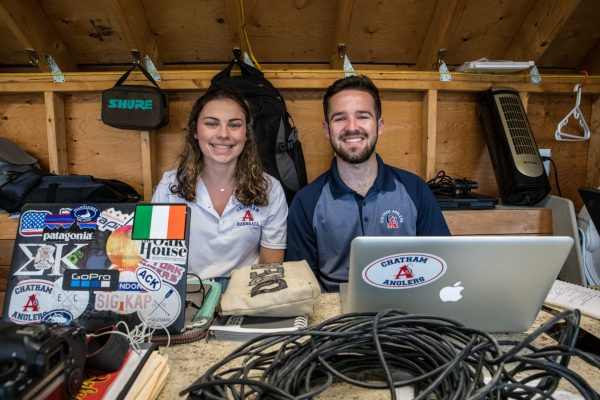 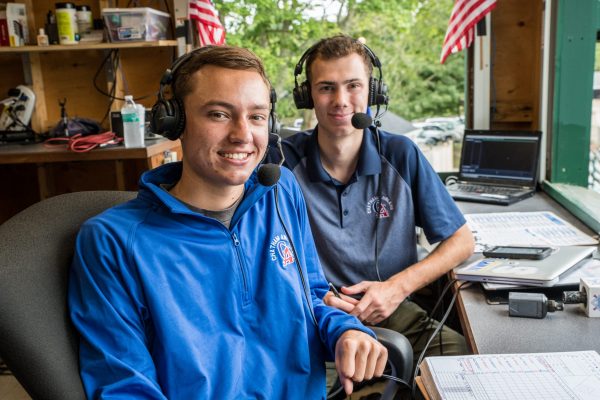 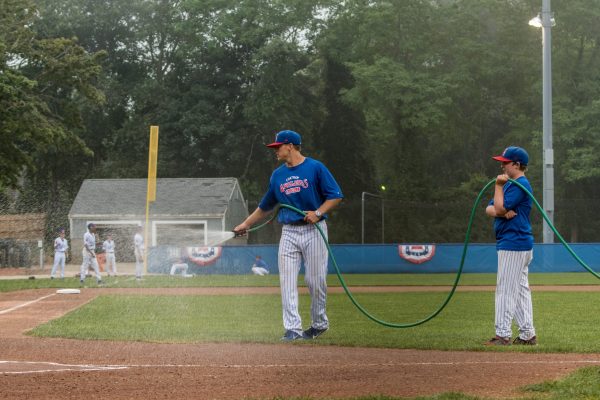 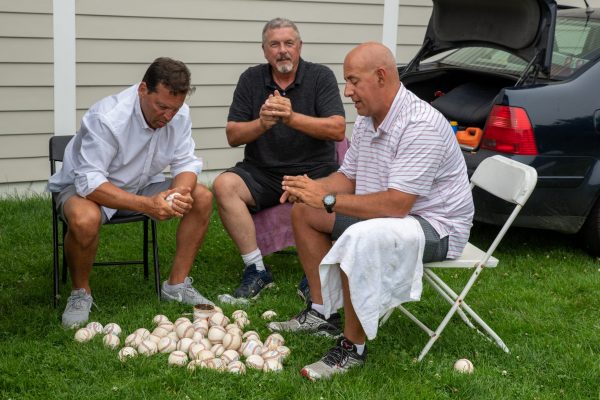 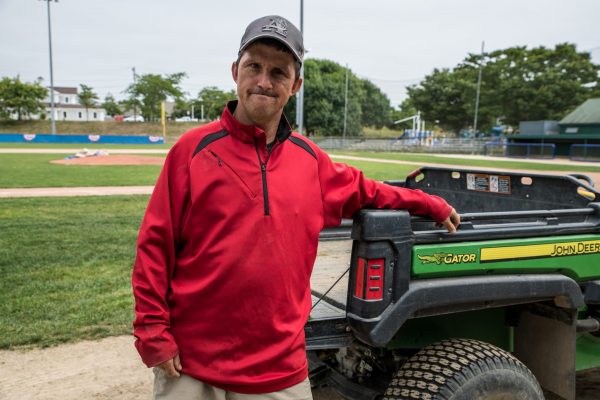 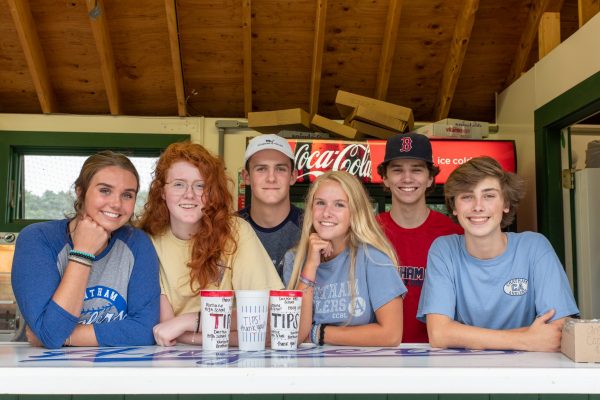 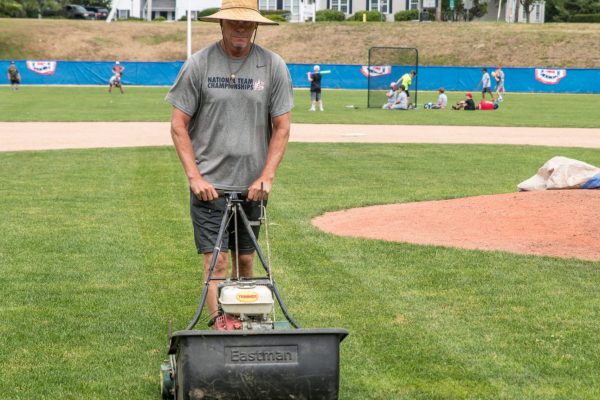 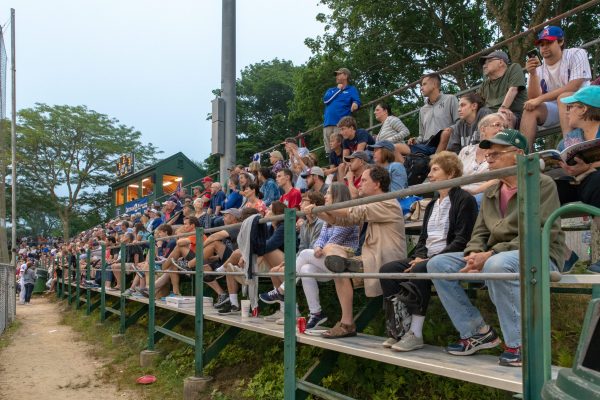 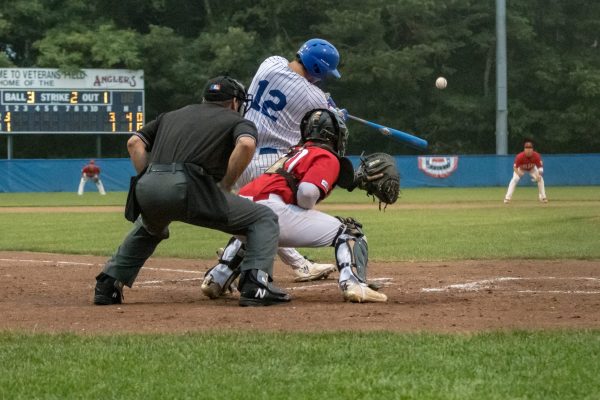 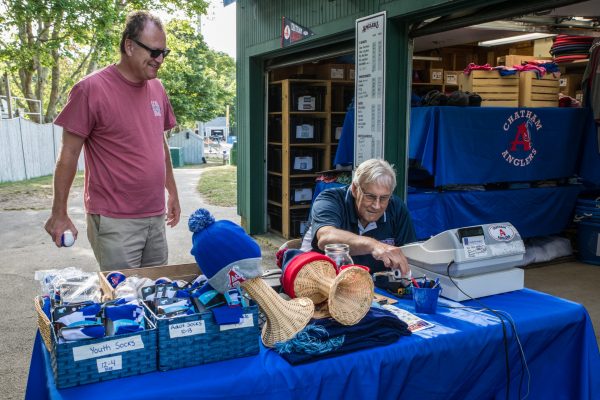 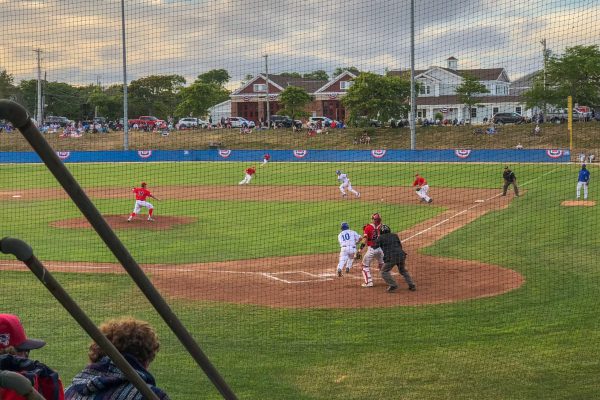 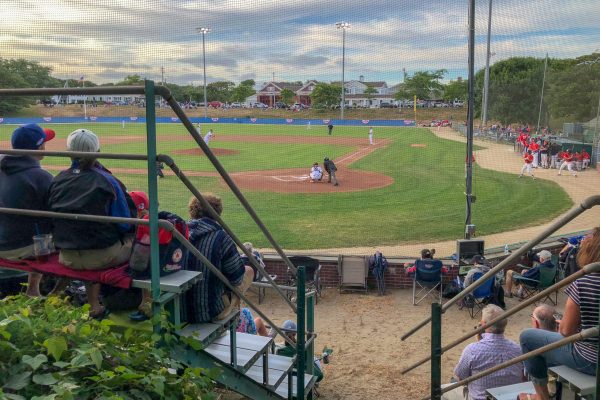 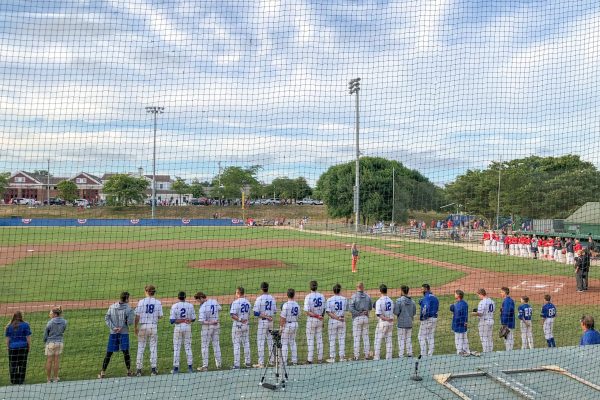 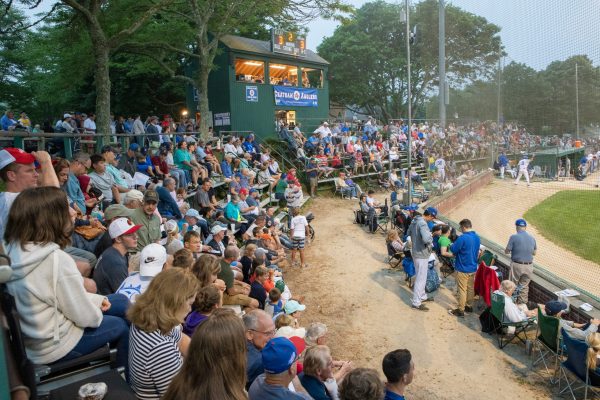 Chatham is a diamond jewel among the 10 Cape Cod Baseball League franchises in a league recognized as the best summer collegiate baseball organization in the country. The season only lasts from June to August, but the Anglers (nee Athletics) have been creating memories for generations.

The games are the centerpiece at Veterans Field, played under warm summer sea breezes, brilliant sunsets—and occasionally interrupted by blankets of fog. It’s an old-fashioned ball yard draped in red, white and blue bunting just a fly ball from a Main Street straight out of Americana. However, before the Star-Spangled Banner is sung and the first pitch thrown, the park is alive early and bustling with activity. On the following pages, take a journey through a day in the life at Veterans Field—before, during and after an Anglers game.

The Anglers championship baseball clinic, conducted by coaches and players, is for girls and boys ages 6-17 with seven weekly sessions during the season. Anne Day, a summer resident from Connecticut, coordinates the program. She’s had three sons participate and remembers Chicago Cubs star Kris Bryant being a favorite when he played for the Anglers in 2011. Cody Semler, a member of the Anglers coaching staff in 2018, directed the camps.

“I like being around kids,” says Semler, who played in the Tampa Bay minor league system. “We’re teaching skills, and at the same time, having fun. With the young ones, we concentrate on fundamentals, a day on throwing and catching, a day on fielding, another day hitting off a tee. For the older kids, we ramp up the instruction with game situations.”

Most of the players are involved in at least one camp session during the season. For pitcher Austin Bergner, 2018 was his second summer in Chatham. He said his participation wasn’t out of obligation, but a desire to give back.

“The Chatham community does so much for us—it’s the least we can do,” says Bergner. “And I like getting up early, being on the field in a baseball environment. It’s relaxing and keeps me in the right frame of mind.”

When the clinics end, Veterans Field transforms from a diamond in the rough to a polished gem. In the early afternoon, players and coaches groom the field for that night’s game. First pitch is at 7 p.m., but often players arrive by mid-afternoon for extra practice.

Chatham manager Tom Holliday is a veteran of more than 40 years of college coaching, but 2018 was his first summer with the Anglers. His day begins with a morning meeting with general manager Mike Geylin. Then there are calls to and from college coaches and pro scouts.

“My focus is on the players and the games, but there’s other things, too,” says Holliday. “You’re dealing with buses for road trips, temps (players on temporary contracts), housing, injuries, playing time. It’s been an education. Once I get to the field, though, I’m all in on the game.”

Buy me some peanuts and …

While the players are getting ready, so too are Kathy Olsen, with daughter Claire and son Sean, and Ed Baird and Deb Kavey. The Olsens run the snack shack concessions behind first base and Baird and Kavey manage merchandise under the press box.

The concession operation begins in the morning when a fresh supply of hot dogs, hamburgers and rolls are delivered. The workers, high school and middle school students, report around 5:30 p.m. The grills are fired up and soon the first smells of ballpark treats fill the air.

On a typical night, the snack shack will sell about 200 hot dogs, 100 burgers and 250 cups of popcorn (in a souvenir Anglers cup). The concession stand remains open until the last out. The staff then cleans up and restocks for the next game.

Baird, a former pitching star with Chatham in the 1960s and a member of the Cape League Hall of Fame, has been running the Anglers’ merchandise store with Kavey for seven seasons.

“I came here as a kid from Connecticut more than 50 years ago. Those summers were some of the best of my life,” says Baird. “Chatham is a special place. This is a way to stay involved and give back a little.” Baird estimates they’ll sell about 2,500 hats and perhaps 2,000 shirts over the course of the season.

Take Me Out to the Ball Game

It’s game time. Veterans Field is a natural amphitheater with spectacular sight lines. Lawn chairs are lined up behind the home plate screen. Elevated bleachers wrap around from the first-base dugout down the third base line and more chairs fill the hill behind the stands.

Nearby is a Little League field and playground with swings and slides. When twilight fades to evening, the park’s lights are a beacon to summer visitors strolling Main Street.

It’s about a half hour to the opening pitch and Holliday is at home plate, meticulously raking the batter’s circle. A tractor is dragging a chain screen to prepare the infield. Music is playing from the press box and fans are filling the stands.

Soon, public address announcer Peter Burns is announcing the starting lineups as the umpires meet at home plate to review ground rules and receive lineup cards from Holliday and Bourne manager Harvey Shapiro. Players from both teams stand in front of their dugouts, facing the American flag in center field as the national anthem is played. The Anglers take the field and Bergner trots to the mound with the Rolling Stones song “Start Me Up” playing.

The first pitch, thrown precisely at 7 p.m. to Chase Murray, is called a strike by umpire Dan Boomhauer. The Anglers will beat the Braves, 5-3, in a game lasting 2 hours, 44 minutes. Bergner is the winning pitcher.

It’s almost 10 p.m. and there is a hint of fog drifting over Veterans Field. Young kids, including some who were in that morning’s clinic, scamper onto the grass to get autographs from the Anglers. This is one of the enduring charms of the Cape League. In a few years, many of these same players will be in pro ball, or already in the big leagues, and walled off from fans. But not on this night.

Michael Busch from the University of North Carolina, Bergner’s teammate during the college season, was told about what some like to call “The Chatham Experience.”

“Austin said it was a great league and Chatham was one of the best places. I can see why now,” says Busch. “It’s everything I hoped it would be. The host families, the fans, the Fourth of July parade on Main Street—wow! Everyone treats us so well.”

And the community support is perhaps best demonstrated as the night winds down. After every game, home and away, a full meal is served to players and coaches. Sue Thomas and daughter, Madison, coordinate the program and receive donations from local businesses and generous fans. Anything left over is donated to the fire department.

After a long day and night, the lights go out. Veterans Field is at rest, but only for a few hours. The sun will soon rise on another day and another game tomorrow.