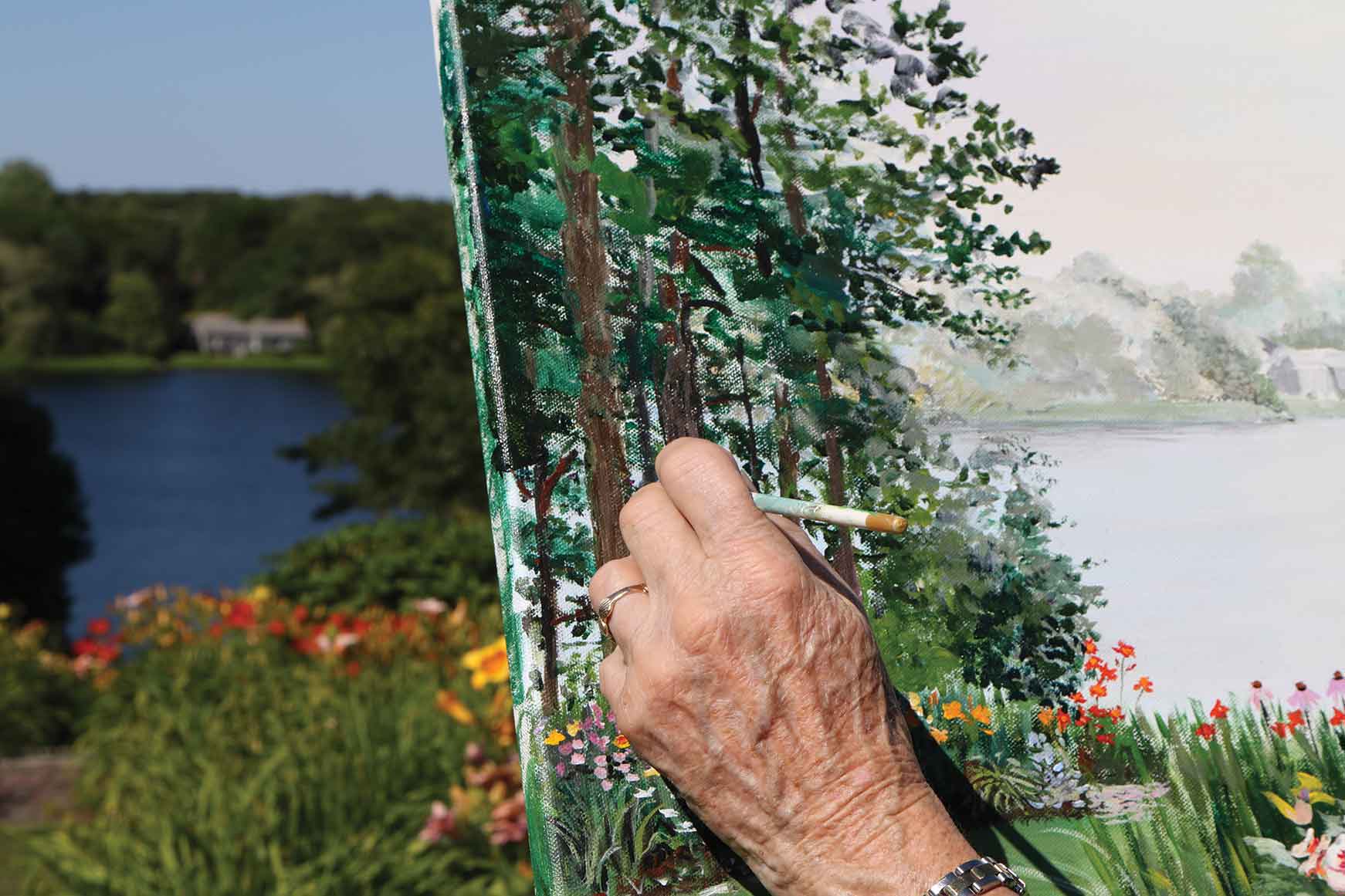 A Brush with Blooms

Artist Tilda McGee Bystrom designed her garden with an eye toward color and texture—as if it were a painting on canvas.

Before Tilda McGee Bystrom was a painter, she was a gardener.

Outside Bystrom’s Stillwater Garden Studio, a tranquil one-acre garden on Stillwater Pond shimmers in the summer sun. When Bystrom moved here in 2001, the garden was filled with pine trees. After 14 trees fell during a storm, Bystrom and her husband took the opportunity to enhance the gardens and showcase the water views. They added stone walls and planted 28 varieties of rhododendrons, as well as hydrangeas, hosta, daylilies, heuchera, wild geranium and irises from her late mother’s garden.

“Since I was a kid, gardens have been a part of my life,” says Bystrom, who designed the garden with an eye toward color and texture—as if it were a painting on canvas. Bystom’s garden has been featured on the Chatham Garden Club tour and has served as a classroom for her plein air painting workshops, where students, working amongst foxgloves, daylilies, hosta and sedum, can keenly observe nature’s beauty. The artist, known for painting local sites such as the Chatham Fish Pier, sailboats and portraits of private homes, first photographs her outdoor scenes and then works indoors from a photograph.

Bystrom, whose paintings sometimes take weeks to complete, paints in acrylics and fixes mistakes by sanding down a color. Her paintings are both realistic and romantic. She edits out weeds and dead plants, adds flowers, such as lupines, and fixes the shapes of trees to her liking. One homeowner said he liked the scenic landscape Bystrom had painted into the portrait of his house so much that he hired someone to replicate it.

“You give us a better world,” people say about her paintings. 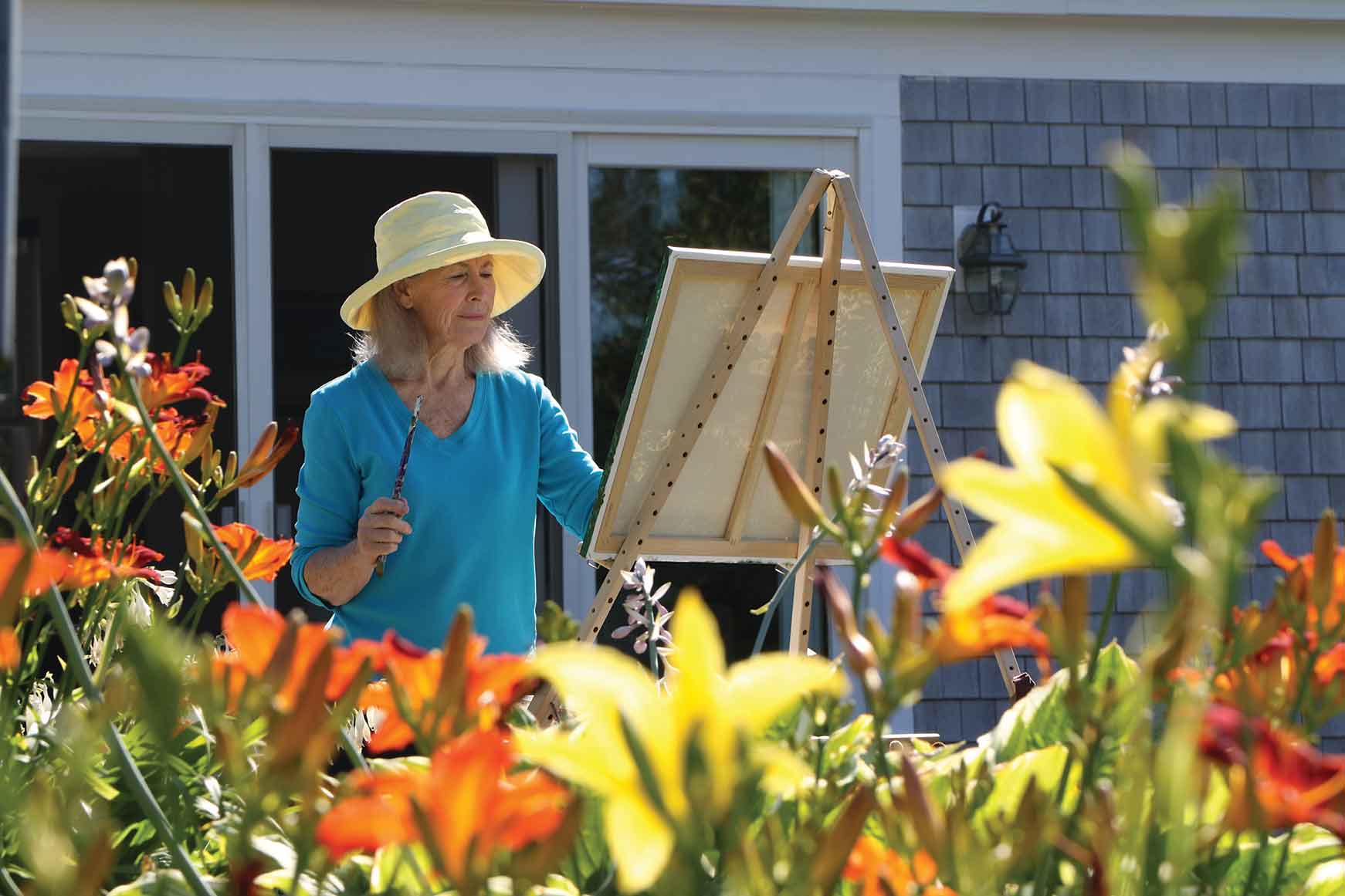 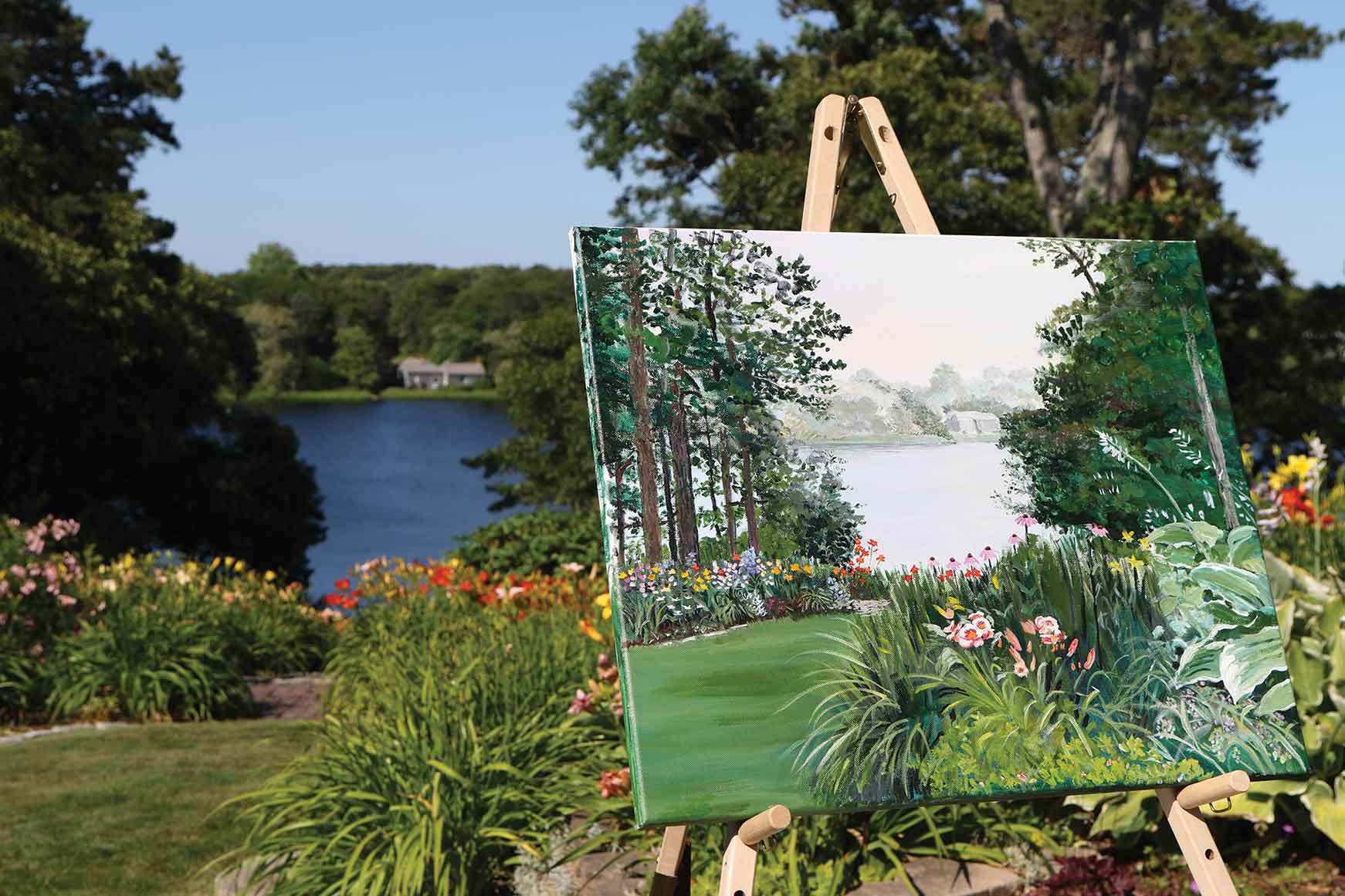 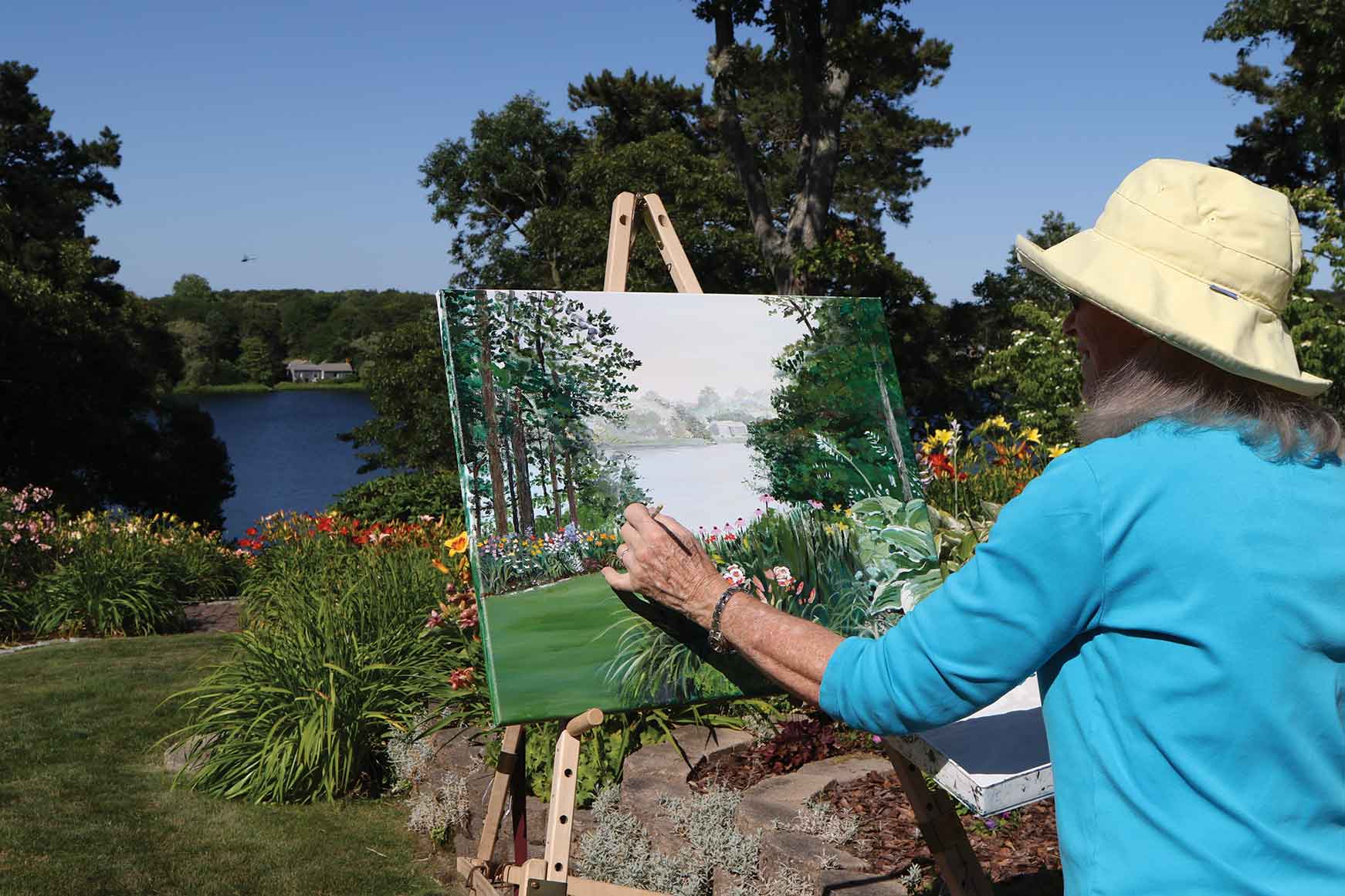 Pati DuVall works on a painting in her South Chatham garden, which features 130 hydrangeas in 40 varieties.

Many years ago, artist Pati DuVall of Chatham performed as a ballerina with a dance company. So it’s no surprise that the shapes of the ballerinas in their tulles and gossamers inspire her paintings.

On a warm, sunny morning in July, DuVall is painting blue hydrangeas blooming next to a white arbor. Her South Chatham garden, a stop on the popular garden tour sponsored by the Cape Cod Hydrangea Society, boasts plenty of shade and pine needles in lieu of grass. She and her husband began their garden in 1987, using cuttings from friends’ hydrangeas. Today, they have 130 hydrangeas in 40 varieties. Paths meander past homemade birdbaths imprinted with leaves of oakleaf hydrangeas. The air is fragrant with pine needles.

Earlier in the morning, DuVall applied a yellow ochre wash to her canvas. She carries a box filled with her paints and brushes and a portable easel.

When she first arrived, she walked around taking pictures, examining the way the light hits the plants and the trees. Once she found the perfect spot, she started sketching her picture in acrylic paint on the canvas. She first fills in the dark colors, then uses light to create depth.

DuVall paints rapidly. She estimates she is twice as fast as everyone else. This gives her an edge when she is painting en plein air, where the light changes rapidly. “You just try to figure out the lighting so it looks good,” she says. To paint in the open air, DuVall puts up with the usual problems created by stinging insects, sunburn and paint drying too quickly. And then there are curious onlookers from the hydrangea garden tour watching to see how her painting progresses.

DuVall began painting in 2005 and is now a member of the Guild of Chatham Painters. A retired Chatham Deputy Shellfish Warden, she often paints girls clamming in the flats, in addition to many of Chatham’s beloved sights, such as lighthouses and boats.

In her painting created on this summer day, DuVall’s hydrangeas look like choreographed ballerinas in tutus taking a bow. She calls the painting “Summertime Blues Serenade.” 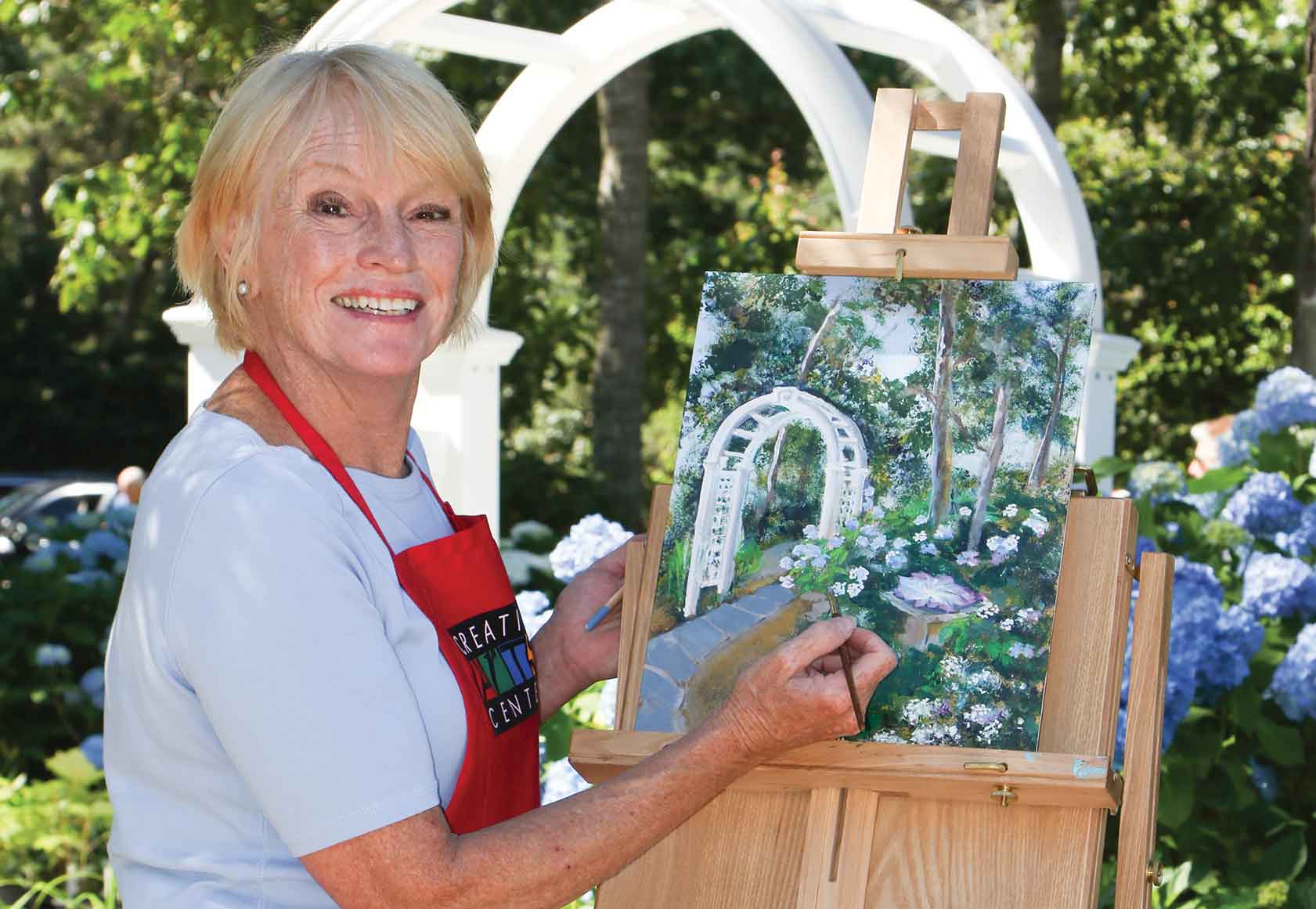 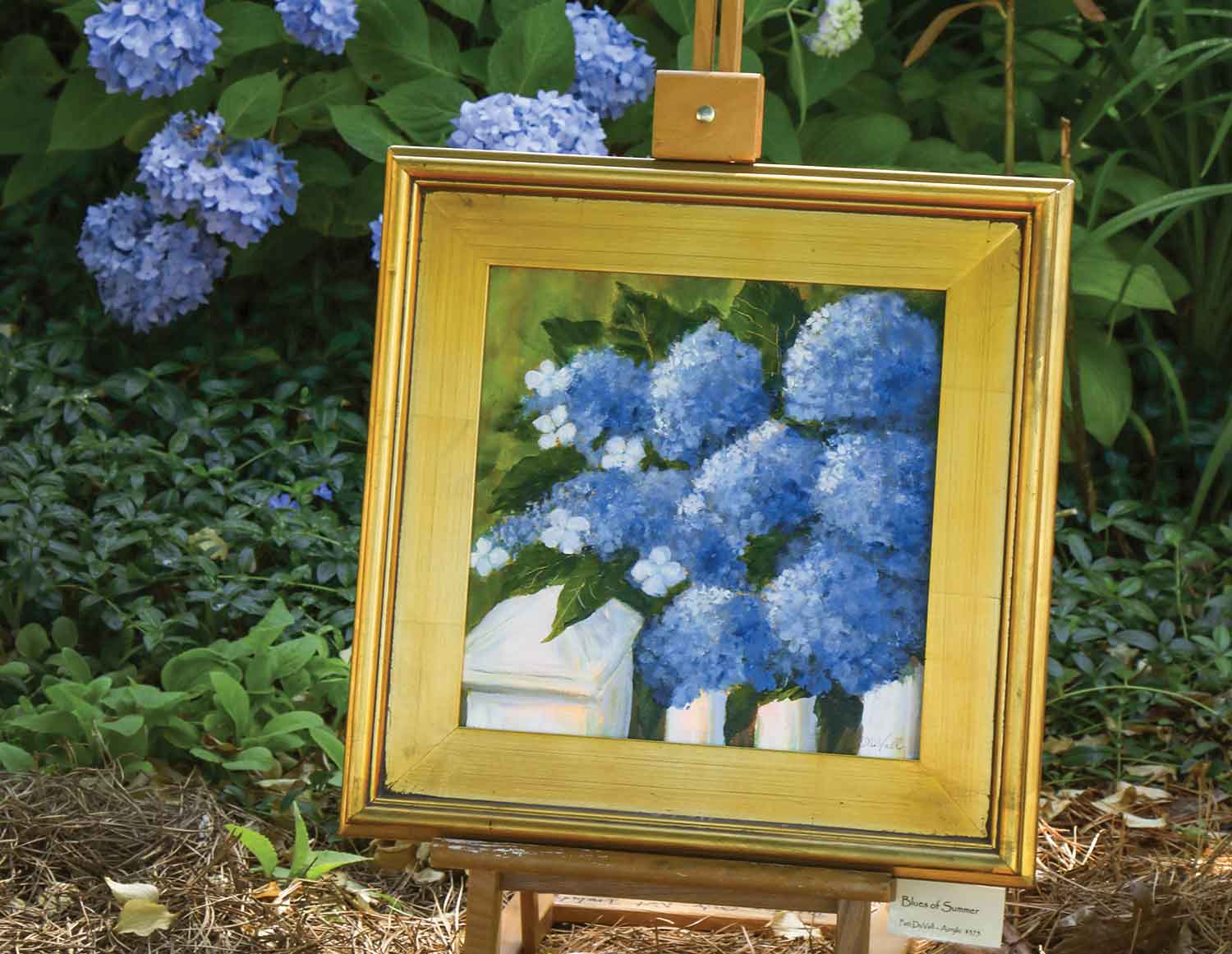 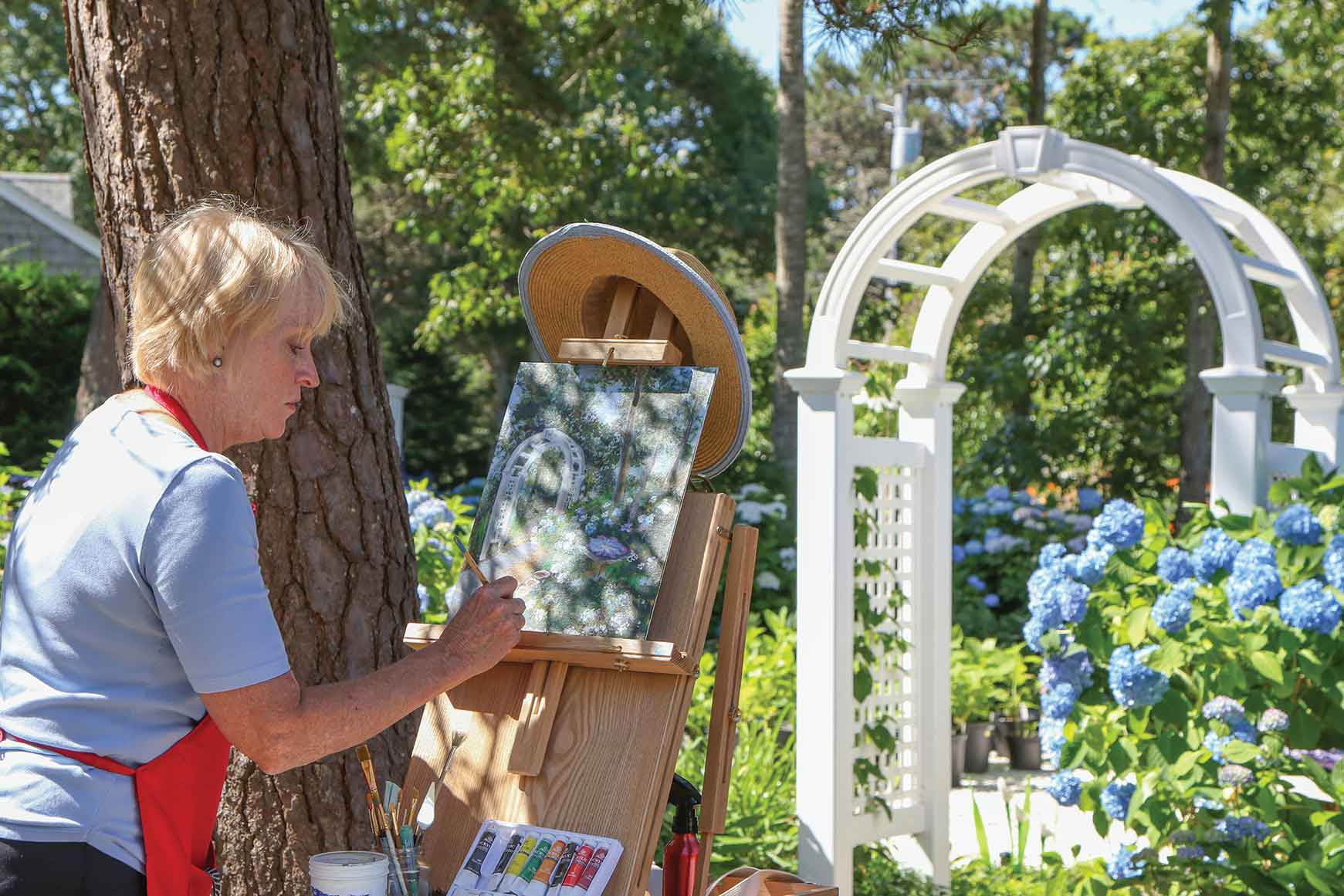 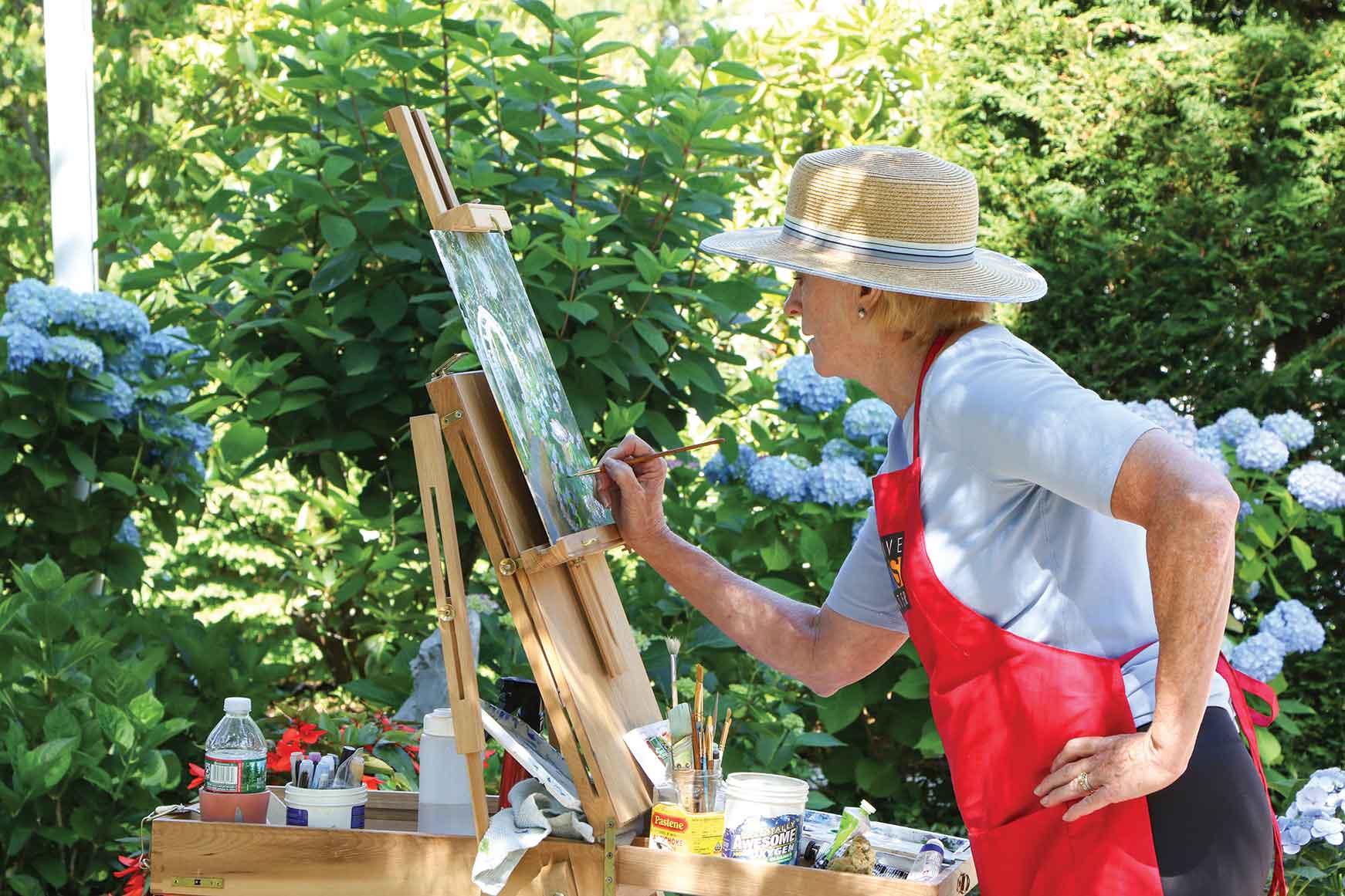 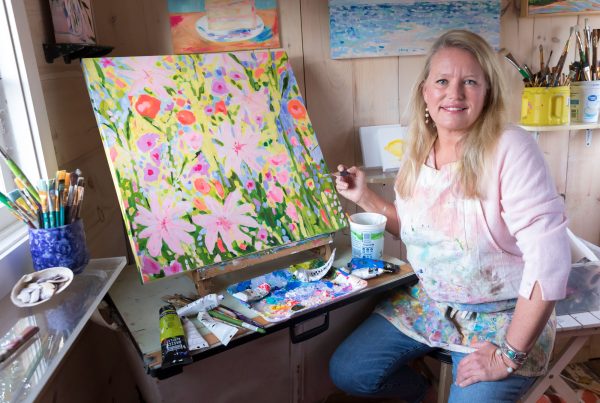